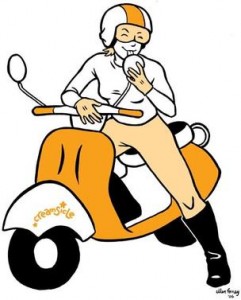 As many of you already know, a year ago, a tragedy struck the artistic community here in Seattle a little over a year ago. While there’s no need to go into the specifics (you can read more about the crime here), two of the victims were good friends and artistic peers to many of us here at the company and we felt compelled to activate a program that we’d been discussing for some time: the Artist Tickets.

The idea was to ask well-known graphic artists to donate a work of art that would adorn a special, limited-edition ticket. If a producer opted in to the program, then they would give their ticket buyers the options to receive a cool, collectable ticket by just paying a quarter extra on their, already low, ticket fee. We would then donate all proceeds from the sales of these tickets to a charity of our choosing.

When we began to get news on how the families of the victims of the Cafe Racer shootings were struggling, we decided to put the Artist Ticket program into place in an effort to raise money for those that lost so much. Two nationally known artists, Ellen Forney and Jim Woodring, just happened to be regulars at Cafe Racer and generously donated their artwork for the inaugural batch of tickets and, just like that, the Artist Ticket program was born.

We’ve now passed the year anniversary of that horrible day and are proud to say that we’ve raised over $7,000 for the families of the victims. This is still a long way off from our goal of $25,000 but we feel it’s a very admirable start. END_OF_DOCUMENT_TOKEN_TO_BE_REPLACED

About six months ago, on May 30, 2012, the Seattle artistic community was dealt a massive blow.

A lone gunman, Ian Stawicki, walked into the University District artist haven Cafe Racer and opened fire, killing two prominent members of the Seattle music scene, Drew Kariakedes and Joseph Albanese (known to most by their stage names Shmootzi the Clod and Meshuguna Joe) as well as Donald Largen and Kimberly Layfield. An employee of the Cafe, Leonard Meuse, was also shot but, miraculously, survived. The shooter then shot and killed Gloria Leonidas, a mother of two, in the Downtown/First Hill neighborhood about 30 minutes later, while stealing her SUV. He then drove the stolen vehicle to West Seattle where he killed himself in front of Seattle Police officers. It was a day of terror and tragedy that many of us in Seattle will never forget.

Drew and Joe were good friends of mine as our bands had played together often over the last 15 years. In fact, the last show that their band, God’s Favorite Beefcake had played, had been with my band The Bad Things, the Saturday before the shootings. The loss of these incredible musical talents cast a dark shadow over our tight-knit musical community and six months later, their absence is still felt every day.