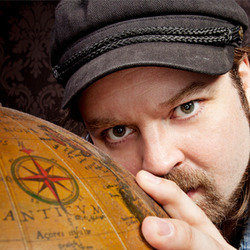 An Edinburgh Festival Fringe veteran several times over, Glenn Wool has the art of delivering a multi-faceted performance down to a science. One can, for instance, kick things off with a light-hearted video featuring hand puppets performing Nazareth’s “Hair of the Dog.” Tales of time spent abroad can temper bewildering experiences with transformative lessons learned. There’s also the option of utilizing as a backdrop a few Popeye slides, the purpose of which remains tantalizingly unclear until the closer’s big reveal. And who knows? An arsenal of geography-related puns might even earn several applause breaks over the course of an hour.