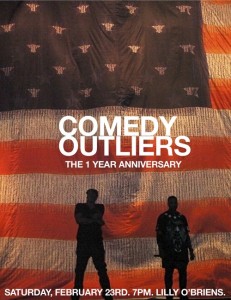 We are celebrating the one-year anniversary of “Comedy Outliers” this month, and we couldn’t be happier with what we have built. Having taken elements from some of the best shows we have either produced on our own or performed on, we have developed a strong stand-up comedy showcase that brings the NYC comedy-club experience to the audience without the aggressiveness and pressure of those clubs. Over the past few month our show has been featured in various publications (TimeOut NY, AM New York), created buzz within the New York stand-up comedy scene (we get submissions on a weekly basis from comics who want to perform on the show), and created a strong, faithful following. What has helped us make “Comedy Outliers” so successful in such a short period of time? We attribute our success to three main points: END_OF_DOCUMENT_TOKEN_TO_BE_REPLACED