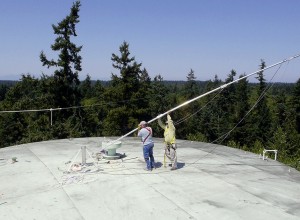 Neighborhoods in Seattle and the Puget Sound have strong individual identities, defined and protected by their denizens. Now some neighborhoods will even have their own radio stations. The Federal Communications Commission (FCC) recently approved 5 new Puget Sound neighborhood radio stations, and one of them, Voice of Vashon, may be on the air as early as October. In addition, 10 more moved toward obtaining FCC approval earlier this month, with the announcement of a 90-day “settlement period” for finalizing their application.

These FCC approvals constitute the creation of a new kind of “neighborhood radio” station —  broadcasting for the first time in geographically-defined communities in the nation’s largest cities. Although low-power FM radio stations (LPFM) reaching 2 to 10 miles have been around for more than a decade, licenses were awarded almost exclusively in sparsely-populated rural areas. This exponential growth in audience size and influence with a particular neighborhood, island, small town or suburb redefines the potential for these tiny-but-powerful media outlets.

In addition to a terrestrial broadcast, neighborhood stations can expand their reach by live streaming and hosting on-demand content. They will incubate local talent and have the potential to re-imagine public media. Many will be participatory and volunteer-powered, addressing the widening digital divide with low barriers to access tools and training. Ultimately, they will form a neighborhood layer of infrastructure for the public media ecosystem and emergency response. 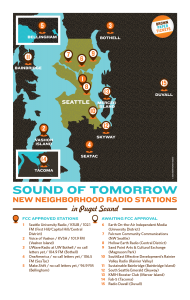 Creating and replicating this kind of community service juggernaut in large cities across the nation is what  Not-Just-For-Profit ticketing company Brown Paper Tickets had in mind when hiring public media professional Sabrina Roach as a Doer (a community change-maker) with a goal of filling every available low-power radio frequency with a qualified applicant, getting their stations built and sustainably on-air. Roach directed National Make Radio Challenge and created a Puget Sound Neighborhood Radio Cohort (PSNRC), the nation’s first support network for regional LPFM radio applicants to pool resources and foster a learning community to support these tiny-but-fierce stations.

“This group is ahead of the curve,” said Sally Kane, CEO of the National Federation of Community Broadcasters. “Although we see collaborations between community broadcasters, they often happen after those stations have already formed a culture of being very independent, and by that time they can find it much harder to share resources. Puget Sound Neighborhood Radio Cohort is setting a tone from the very beginning that will make every radio station in their group stronger and more sustainable.”

Roach supports the PSNRC with free counsel and guidance to public and private resources, panels on fundraising and education on best practices in the industry. She develops relationships and shares resources offered by public agencies, private corporations and leaders in public media, community media and commercial media that could provide assistance or support to the applicants, and shares industry news, best practices and connections with PSNRC applicants.

“We’ve created a virtual neighborhood radio station incubator for cooperation, in addition to operation,” Roach said. “My work is part of where the rubber hits the road in the implementation of Brown Paper Tickets’ social mission to build stronger, healthier communities,” said Roach.

KVSH 101.9 on Vashon Island has moved quickly since getting an FCC construction permit and hopes to go on the air as early as October.  Their format will be, “All Vashon all the time,” and their motto is “Island-powered media.” With 93% of their $50,000 funding goal met, volunteers have been building as the funds came in and they are already “Raising the Tower” for their new community FM radio station. Just last week a team of volunteers climbed to the top of a giant water tank to erect the station’s mast and antenna. You can view the video on the Voice of Vashon donation page:  VoiceOfVashon.org/RaiseTheTower.

If you’d like to volunteer to help a new radio station coming to your neighborhood, email Sabrina, or access the links below to learn more.