Losing Your Following? How to Keep Fans Coming Back 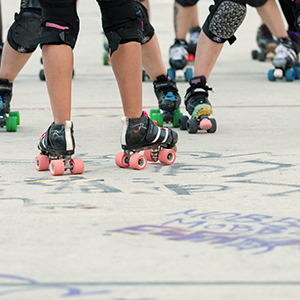 (Part two of a series on roller derby fan retention.)

In the previous blog post on fan retention, I suggested changing the notion of “by the skater, for the skater” to “by the skater for the fan.” The post received an outpouring of comments, questions and ideas. Thanks everyone for ringing in.

Nothing is more important than playing. Period. The sport draws a rich subculture and instills confidence unlike anything else I’ve experienced. If playing is the focus and drawing a crowd isn’t, that’s fine.

But if your business model includes playing to fans, make it a goal to continually get more attendees to return and one day build a sustainable fan base.

First off, don’t confuse family and friends with fans. Those who know skaters and staff account for a significant number of people, but their attendance fails over time and they often don’t return after “their” league-member leaves.

Fans are customers. If a restaurant sells food the owner likes, but customers find unappealing, change the menu or accept the consequences. Separate your opinions from that of the paying customer. You can give fans the night they want and they’ll return.

You can give fans the night you want, which might work, but fans won’t necessarily grow to like it.

There is no second chance.

Are skaters qualified to play? New leagues sometimes rush into games without the skill or the stamina to make a good impression. As excited as it is to get out there, slow-moving, unstable, sloppy skaters trying to execute high-level strategies are difficult to watch.

Those who play prior to mastering minimum skills jeopardize themselves, teammates and opponents. Many serious injuries I’ve witnessed, (such as compound fractures) occurred during a league’s first game. As badly as we feel for the skater, the medical attention and screams impact the crowd. Imagine how it affects kids in the audience.

Be patient. To get your skating fix, scrimmage until the team is ready.

Speed of the Game – Controversial?

It need not be. The WFTDA rules allow for many styles of play. Can game play or speed itself create retention problems? Yes, but to what extent is unknown. I’ve had many exchanges with hardcore fans that left dissatisfied with the experience. My family no longer attends games.

In 2010, using the same/very similar pack definition rules, Detroit’s Racer McChaser put up a short-lived record of 36 points in one jam. Amazingly, her opponent was on the track the entire time. No stopping, no bracing and she put up a 36-0 run against her opponent. It took a skilled use of both offensive and defensive blocking. Would that look the same today? It’s highly unlikely, though many elements of the speed differentials used and the offensive blocking remain valid strategy today.

There are many ways to play. Half the fun of coaching is developing something new. I see 50 games a year or more and quickly notice teams that execute situational defenses/offenses all night, when offensive blocking would produce far greater points and excitement.

Try to keep nights within 2 ½ hours. Warm-up time is a necessity, but 30-minute halftimes (especially during double headers) and long breaks between games thins the crowd quickly.

Often, leagues leave seating wide open. Don’t. Put the skaters on the far side of the venue and the crowd on the other, facing them. Cordon off a section specifically for the fans so that they all sit together. The venue looks more full, the crowd feeds off each other and it’s easier for the league to interact with the audience.

If you have entrance photos or videos for your teams, run them while players are introduced. Make it dramatic. Dim the main lights and run specialty lights if you have them. No need for taglines, just announcers projecting with emphasis on player names, like they do in pro-sports arenas.

Engaging Fans During the Game 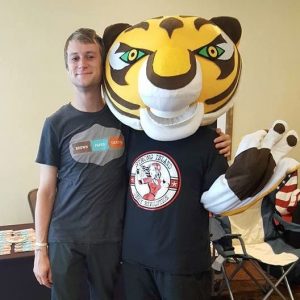 Kudos to WFTDA for appointing emcees to this year’s playoffs. As emcee of the D1 Madison tournament, I hyped the crowd, ran fan games during halftimes, and was turned loose to entertain. The role generated a lot of positive feedback.

Give announcers an appropriate, family-friendly leash. During timeouts and downtime, let banter flow. If announcers are having fun, so are fans.

Kids’ games. Make them clever, don’t just give in to running races, dress-up races, three-legged races. I am the biggest kid in the room, no matter where I go, so interviewing the little ones is a must. What they say during interviews is half the fun. Besides, it’s catering to families.

Skater skills contests. Hold a skills contest at halftime and raise money for charity. Have buckets with each skater’s name at the merch booth. Have “runners” take the buckets into the stands to sell raffle tickets. Give the audience a stake in who wins – the audience places each ticket into the container of the skater they think will win and the winning skater then draws the ticket from his/her bucket.

Be creative, keep the night moving and above all, enjoy it.

How do you keep your fans entertained? Ring in below; we would love to hear your ideas.