On August 3rd, the burlesque world lost the woman who is probably most responsible for the burlesque revival and the preservation of its history. A legendary performer in her own right and an inspiration for multiple generations of burlesque performers, the “Marilyn Monroe of Burlesque,” Miss Dixie Evans.

Born as Mary Lee Evans in Long Beach, California on August 28, 1926, Dixie started her career in the 40s as a model and chorus girl, eventually becoming a star dancer. She was a headlining burlesque performer by the early 50s, performing up and down the West Coast as part of Harold Minsky’s “burlesque wheel” touring circuit. Minsky encouraged her to adapt her stage persona to that of Marilyn Monroe, given her strong resemblance to the, then rising, film star. While resistant at first, she eventually adopted the Monroe persona and it was that act that would define her career as a burlesque dancer.

Evans developed a well-received tribute show to Monroe following her death in 1962 but eventually dropped the act after being mistaken for the dead film star. This was deeply disturbing to Evans and so she eventually adapted her stage show into a parody of Irma La Douce, Shirley MacLaine’s character in the 1963 romantic comedy of the same name. END_OF_DOCUMENT_TOKEN_TO_BE_REPLACED

Tuesday Tease: This Week in Burlesque! 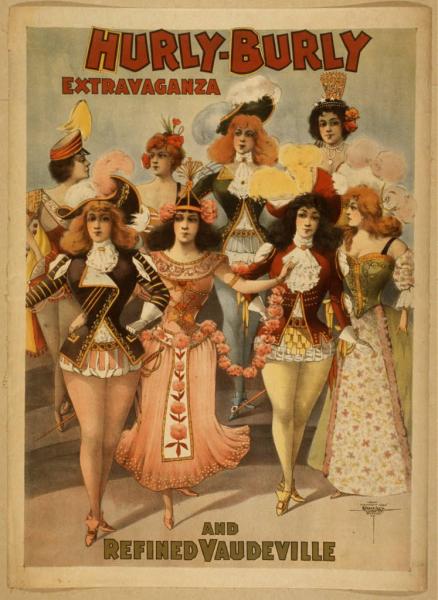 One thing that I love about the modern burlesque scene is that it’s constantly looking for things in popular culture to parody or pay tribute to. I mean, technically, this is what the original definition of burlesque was: “a literary, dramatic or musical work intended to cause laughter by caricaturing the manner or spirit of serious works, or by ludicrous treatment of their subjects.” This week, we have some great events that do just that. We got  a tribute to Saturday morning cartoons happening in Seattle, a Wizard of Oz-themed show set to the music of Pink Floyd in New York and a tribute to Joss Whedon in Baltimore.

Ironically, what we think of as “classic” burlesque, isn’t as much about parody as it is about sensuality and grace. We got tons of shows that feature burlesque of the early to mid 20th century variety as well. There are burlesque classes and festivals happening and even a 6th annversary party for Atlanta’s Syrens of the South! Also, Gotham Burlesque in New York is offering a special discount for this week’s show for our readers.

Basically, this week’s Tuesday Tease is just an opportunity for us to brag about the amazing producer that work with us and highlight some of the amazing burlesque events happening this weekend. I guarantee you’ll find something to get you off the couch and out supporting your local burlesque scene.

Looks like this is going to be one HOT August! END_OF_DOCUMENT_TOKEN_TO_BE_REPLACED