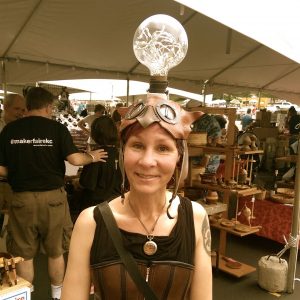 Author’s Note: That’s me wearing Eureka (more about that later). As I mentioned in a previous post, I got to help out at Maker Faire Kansas City. Rather than telling you about my experience as a maker, I’ll leave it to Chad, a business student who attended the faire and calls it a cross between a Renaissance Festival and Comic Con. If you’ve never been to a maker faire, this first-hand account will tell you exactly what to expect.

I attended Maker Faire Kansas City (MFKC) at Union Station on Sunday, June 26, 2016.  This report is in response to the assignment to attend Maker Faire and write about the experience.  I enjoyed MFKC and plan to go again next year.  There were many exhibits that appealed to children, science/engineering “nerds,” and art/craft aficionados.  (I would consider myself a member of the latter two groups.)  In many ways, the event felt like a cross between a Renaissance Festival and Comic Con.  There were contests, such as First Robotics and the Egg Drop – where kids used plastic materials to design contraptions to save an egg from a 3-4 story fall.  There were costumes with various themes, including Captain America, a pirate and several medieval-looking outfits.

One costume in particular caught my attention.  The costume, called “Eureka” (see photo), was being worn by Ms. Tamara Clammer, a doer with Brown Paper Tickets.  Eureka features a GE Mazda hand-made lightbulb and was entered into the Second Use Art & Design Challenge in Seattle.

MFKC was a showcase of entrepreneurship in Kansas City.  The vast majority of booths at MFKC were local small businesses.  A few examples that I perused or purchased from included Built KC, a custom woodworking and design firm owned by two brothers and located in Shawnee, Kansas;  Reinke Arts, owned by twin brothers that create photo-real artwork based on movies, TV and comics; and Nether Fable Designs, a 3D-printing service company based in Kansas City, Missouri that offers pre-printed items as well as custom printing and designing.

Additionally, there were booths sponsored by larger entities, such as Radio Shack and UMKC, and one small business that I saw, Poly’s Pleasures custom chainmail jewelry, hailed from Brighton, Colorado.  Many of the products were interactive, and the show gives entrepreneurs a chance to interact closely with many potential customers in an entertaining atmosphere.  Kids and adults alike were captivated by 3D printing and robotics, artwork, hands-on creative activities, virtual reality and science demos, such as a man-sized Faraday cage beside an actual operating Tesla coil that generated streaks of lightning that would arc to the cage or to the beam above.

I thoroughly enjoyed the Faire, both from consumer and entrepreneur student perspectives.  I have already shared the experience with some of my friends I think would enjoy this show, and I plan to get them to go with me next year.  And I purchased a couple of art pieces at MFKC and may have a custom board-game table designed, so friends may need to be forewarned that the Faire can be a bit dangerous for impulsive shoppers.