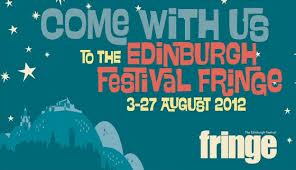 So it’s just about time for the Edinburgh Festival Fringe with many shows starting their preview shows tonight. There is so much to see and do, what do you do first? Well here are some tips for tackling the largest Arts Festival in the world.

1. Get yourself an Edinburgh Fringe brochure so you can see all the shows that are going on. You’ll find them piled up around Edinburgh or you can get one at the Fringe Box Office on the Royal Mile. You can also get the Edinburgh Festival Fringe App for you phone.

2. Other handy brochures to have would be a copy of the ones for the Scottish Comedy Festival, The PBH Free Fringe, The Free Festival and The Alternative Fringe at the Hive. All the shows on the first three are free as are some on the Alternative Fringe. There is normally a collection at the end of the show and you can put in what you think the show was worth. Itsy’s Kabarett at the Voodoo Rooms is certainly worth a visit, it’s always different and always entertaining.

3. The first 2 or 3 few days (1st-3rd) are mostly preview shows which are cheaper by quite a margin so this is a great time to take in shows.. Also you’ll find that most shows will offer 2-for-1 on tickets for the first Monday and Tuesday of the Festival, which are the 6th and 7th this year.

4. Avoid the queues by getting up early and buying your tickets. Most venues will have their own box office and you’ll probably find they have a smaller queue than the main box office on the Royal Mile.

5. Grab a bargain at the Half Price Hut at The Mound. If you get to the middle of Prince’s Street you can’t miss it. There is a clear listing of all the shows that they are offering 2-for-1 that day.

6. Head along to the The Royal Mile where you can see street performers and really take in the atmosphere of the Festival. Throughout the day parts of shows are performed on small stages to help promote the shows.

7.There are also other festivals going on in August which are definitely worth checking out;

Edinburgh Book Festival – The largest book festival of its kind.

Edinburgh Art Festival – The city’s galleries, museums and visual art spaces combine to present the most exciting and intriguing of the modern and contemporary visual arts world.

8. Bring an umbrella and/or a waterproof as sadly it will rain!

9. For a cost effective lunch why not pack a picnic and sit in Princes Street Gardens, The Meadows or Arthur’s Seat.

10. You won’t make great time around the city in a taxi and they are not cheap, so be healthy and just walk to your next show/exhibition/talk or meal.

11. Oh and don’t forget to see Edinburgh! There is the Castle, Scotland’s number one tourist attraction, numerous bus tours, The National Museum of Scotland on Chambers Street which has free admission and if the weather is good you need to climb Arthur’s and enjoy the views across the city.

12. Adopt the “When in Rome” mentality and try something new whether it’s Haggis, stovies, whisky, fudge, tablet or maybe even a deep fried mars bar. Your arteries won’t thank you for it but it’s all tasty stuff!

13. Most importantly pace yourself, there is so much to see and do and many bars are open until 3am or 5am with some opening at 6am and it’s on for a month!!

Whatever you do and see you are bound to have a great time. See a show you want to see, take a chance on a free show and take your photos when the sun is it out!