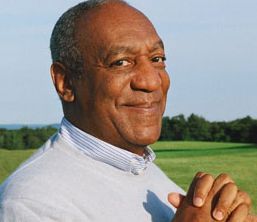 At 75 years old, Bill Cosby comes across sort of like a crotchety grandfather, but while he may have sometimes acted befuddled and hesitant, there was never a moment during his 90-minute show at Treasure Island in Las Vegas when he didn’t know exactly what he was doing. He took the stage wearing a flannel shirt (not a sweater, alas) and loose-fitting cargo pants, on a set that looked like it was lifted from his living room (a rug, a chair with a sweatshirt draped over it, an end table with bottled water and a box of tissues, even a trash can).

Cosby is more of a sit-down comic than a stand-up comic these days, but the fact that he delivered nearly his entire performance seated in that chair didn’t make it any less engaging. Instead, it felt like an evening with a particularly cantankerous family member, one who’d never let you get a word in edgewise and would never consider the possibility that someone else’s opinion was valid. Cosby did engage with the audience – he even seemed overly sensitive at times, stopping at the sound of someone dropping a bottle and when a child started making noise. But in both cases he used the disruption as a chance for a comedic tangent; in response to the fussy child, he detoured into some of his most well-known subject matter, talking about the indignities of the childbirth process. END_OF_DOCUMENT_TOKEN_TO_BE_REPLACED