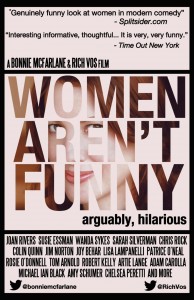 There is a certain dumb thesis that keeps rearing its cretinous head, even though there’ve never been more funny women working in the entertainment industry. While it’s hard to take the argument even remotely seriously (Tina Fey is funnier than the five funniest men on this planet put together), its persistence does demand a rebuke of sorts, which comedian Bonnie McFarlane provides in debut documentary “Women Aren’t Funny.”

McFarlane treats the titular insult with the respect it deserves: none at all. She strikes a playfully annoyed tone throughout, and never for a second doubts the worth of her fellow female comedians. Instead she devotes herself to finding the source of the bias and examines the effect of institutional sexism in the entertainment industry. She interviews Opie and Anthony, Artie Lange and the late Patrice O’Neal, who are all too willing to argue how funny women aren’t. (It should be pointed out that O&A make their living being contrary jerks, and O’Neal was known for leveling crowds with shocking opinions he didn’t take seriously; it’s hard to tell to what extent they feel women aren’t funny and to what extent they are goading a colleague. To be fair, O’Neal concedes that Margaret Cho is “one funny b*tch.”) END_OF_DOCUMENT_TOKEN_TO_BE_REPLACED