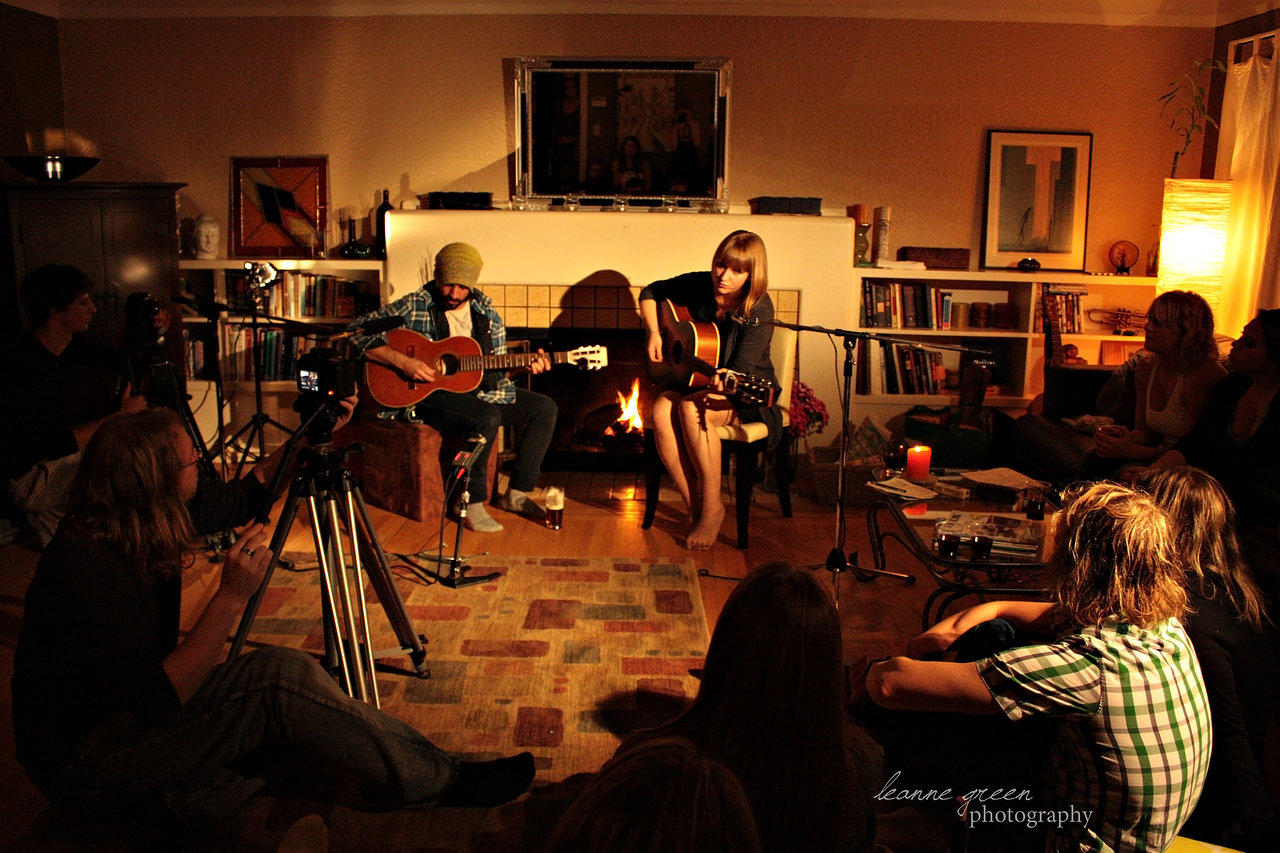 For touring acts, house concerts can be a great way to supplement a tour schedule. Since house concerts are largely word-of-mouth affairs, they won’t cannibalize the audience for a club date in a given city. This allows them the opportunity to play multiple shows in one area and give audiences very different ways to experience their music. Perhaps a band will do a more toned-down acoustic show at a house concert, with a focus on the lyrics and delivery and then turn up the volume for a more rocking bar show the next night. Or a singer/songwriter will perform solo at a house concert and then with a full band the following night in a theater or nightclub.

Today on the Mid-Week Beat, we pay tribute to the house concert and are featuring some that are up and coming around the country. We recommend each of these shows for house concert regulars, but encourage those who have never experienced the unique intimacy that only a house concert can provide to check one out.

Also, remember to get your tickets! These are houses so capacity is extremely limited and tickets go fast.

One thing is guaranteed, whether it’s in a residential home, a home that has been converted into a venue, or an apartment in Brooklyn, your house concert experience will be one that you won’t soon forget.

Saturday, November 16 I Choro Concert with Almir Cortes – San Diego, California   Choro (Portuguese pronunciation: [ˈʃoɾu], “cry” or “lament”), popularly called chorinho (“little cry” or “little lament”), is an instrumental Brazilian popular music genre which originated in 19th century Rio de Janeiro. Despite its name, the music often has a fast and happy rhythm. Choro is considered the first characteristically Brazilian genre of urban popular music. Almir Cortes, who is a visiting professor and San Francisco State University is a superb mandolinist and guitarist. Brian Rice, is one the finest percussionist this side of Brazil, and Colin Walker is a very talented 7-string guitarist from Southern California. This will be an OUTDOOR concert at the home of Zoraida and Gary Payne – Kensington. Please dress accordingly. In case of bad weather, the concert will be held at a nearby home. There will also be a reception following the performance.

Saturday, December 7 I Mark Mulcahy House Concert – Peace Dale, Rhode Island   Roots Hoot House Concerts presents a very special evening with rock & roll legend and ex-Miracle Legion front man Mark Mulcahy. Based out of New England, the revered Miracle Legion lasted from the mid-1980s into the 1990s and did many great things. Mark’s solo career began with Fathering – an album that received loads of praise. From there followed albums Smile Sunset and In Pursuit Of Your Happiness. Eventually, Mark stopped touring and stayed home. Sadly, his wife passed away in 2008 and many of Mark’s long-time fans banded together to record an album of his songs in tribute. The result was Ciao My Shining Star, featuring the likes of Michael Stipe, Thom Yorke, Frank Black, Hayden, Ben Kweller, Josh Rouse, Vic Chesnutt, Dinosaur Jr., Juliana Hatfield and The National. Don’t miss out on this damn special show! This is a BYOB/potluck event which means terrific food to go with an evening of great music from an incredible talent.

Saturday, December 14 I PS9 Benefit House Concert Series – Brooklyn, New York   Come enjoy an intimate evening in a Brooklyn apartment with performances from internationally-acclaimed artists, an organic vegetarian dinner, wine & beer and babysitting right next door! Now in its 4th season, this series is a beloved bargain night out that has raised over $7000 for PS9 arts programs. The evening begins at 6 pm with kid drop-off (they will enjoy pizza, games, and a movie nearby) and adult dinner and drinks. The music starts at 7 pm with Secret Keeper, co-host Stephan Crump’s “miraculous” (El Pais) duo with ground-breaking guitarist Mary Halvorson, and continues after a short break for dessert with the mystical blues of Jeremiah Lockwood at 8 pm.

Friday, January 17 I Danny Schmidt & Carrie Elkin – Seattle, Washington   It’s a special treat when Danny Schmidt and Carrie Elkin, who normally tour separately and solo, get to share the stage together. If the chemistry seems especially sparkful, they come by it honestly, as they are a rare breed: a romantic partnership in real life, not just musical life. And the two together on stage makes for a classic case of the whole being greater than the sum of its parts. Danny Schmidt is best known for his riveting poetic lyrics, which have drawn favorable comparisons to Leonard Cohen and Townes Van Zandt for their depth and complexity. And gypsy spirit Carrie Elkin is best known for her incredibly soulful and dynamic vocals, which have drawn favorable comparisons to Patty Griffin at her most powerful, and Nanci Griffith at her most intimate. Don’t miss these two great artists in a rare split-bill performance, sharing songs back and forth, lending their voices to each other’s tunes, in harmony. And lending commentary to each other’s tunes, in the form of smart-ass between-song banter.

Image courtesy of the MerchHero blog.