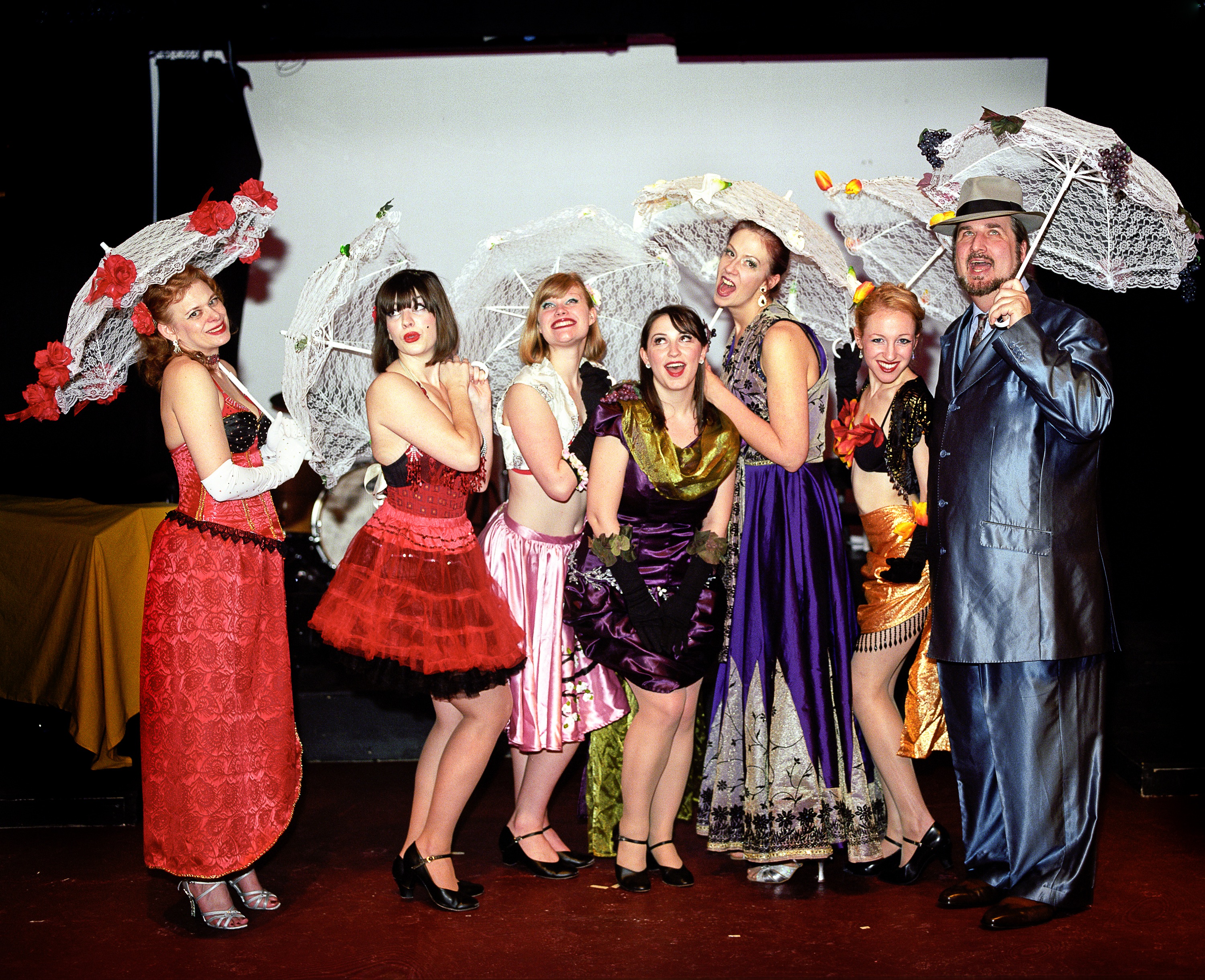 Welcome to the Tuesday Tease, Brown Paper Tickets’ newest weekly blog feature with a focus on the burlesque community that we love so much. Each week we will talk about a historical event in burlesque, an upcoming festival, a notable scene or, as in this week’s inaugural edition, a troupe that we love. We’re extremely honored that the incredible Boston Babydolls have agreed to be the subject of our very first edition of “the Tease.”

Since the Babydolls started in 2005, they have garnered much acclaim from their fair city; they won the Boston Phoenix‘s reader’s poll for “Boston’s Sexiest Dance Troupe” in 2010 and “Boston’s Best Burlesque” in 2011 and 2012, and The Weekly Dig named them “Best Burlesque” in 2011. There’s good reason for the praise that’s being heaped upon them by the fine people of Boston. Not only do they push the envelope in each and every performance by providing a great balance between classic burlesque and modern dance, they also support the future of burlesque by teaching the skills necessary for any burlesque diva to master through the Boston Academy of Burlesque Education (B.A.B.E. for short). In addition to all this, they produce the annual Great Burlesque Exposition, a burlesque festival that’s celebrating its 7th anniversary in March of 2013 (stay tuned!).Whew!These girls (and guy) are busy! We love supporting organizations like the Babydolls who not only create powerful, original art but also actively support others to follow in their footsteps, ensuring the future of the art form.

Mr. Scratch, the Babydolls co-founder, took time from his busy schedule to talk about the history of the troupe, what they’re up to and to offer a little advice for any burlesque troupe that’s just getting started.

Tell us a little about the history of the Boston Babydolls. How long have you been together? How did you get started?
Mina Murray (the co-founder of The Boston Babydolls) and I had worked together on a variety of theater projects and were in a commedia dell’arte troupe together. Mina started doing burlesque and giving lessons on her own, and I was frequently along for tech and security.  In spring of 2005, she got hired to perform at an evening event after a conference on human sexuality — except they wanted a 30-45 minute show, and there was no way Mina could do that alone.  We invited Betty Blaize along to perform some belly dance while Mina was changing costumes. I acted as MC and did some magic. We had a great time. Later that month, we were in London and saw a very, very good burlesque show. The plans for the troupe were hatched on the plane ride home, and we held auditions for the troupe in August.  Our first show was in September of 2005, a benefit for the victims of Hurricane Katrina.

Have you guys seen the burlesque scene in Boston grow since you got started
There was a burlesque scene in Boston before we came along. In 2001, there was a group called the Burlesque Revival Association who did some shows. They had broken up before we we founded The Boston Babydolls. There had been one or two other troupes, but they seemed to be largely inactive. These days Boston has half a dozen or more troupes who perform with a wide variety of frequency — some perform monthly, some seem to appear, do one show, and vanish. We’re thrilled with the enthusiasm with which Boston has greeted burlesque.

You’ve been named Boston’s Best Burlesque troupe by the Boston Phoenix readers for the last three years in a row. That is a huge honor. What do you attribute your success to?
I think it’s as simple as our fans are very passionate and we have a lot of them. There’s no magic formula for success. We work hard and try to make every show better than the one before it. Our audience appreciates how much we value them and they show us how much they value us in the ways they can — attending our shows and, when the opportunity arises, voting for us.

You also have a traveling version of the Babydolls. What can folks expect from the troupe out on the road? Got any other out-of-town shows planned?
Unlike most theater companies, we have a year-round ‘season.’  In the fall we produce “The Wrathskellar,” a horrifyingly dark burlesque cabaret; in early spring we do a long Valentine’s show; over Easter weekend we help produce The Great Burlesque Exposition; and in the summer we tour. This summer we’re in Boston (well, Somerville), Saratoga Springs (NY), Salem (MA), Portsmouth (NH), and Portland (ME).  I’m hoping to add one more venue the weekend of July 20 and 21 — maybe Connecticut or Rhode Island.

The touring company is, for the most part, the same core troupe as the Boston Babydolls. Depending on different performer’s availability, the audience may see a slightly different show.  For example, Betty Blaize isn’t available for our upcoming show in Salem, so Evie Sphinx and Stella Diamond are each doing an additional number.  That keeps the value of the show high — it also means folks who come and see the show more than once aren’t always seeing the same thing.

You also teach burlesque classes. Tell us a little bit more about B.A.B.E., the educational arm of the Babydolls. What can one expect at one of your classes? Are they good for beginners?
Our Introduction to Burlesque classes are our most popular. It’s a four-session course, taught one class a week over four weeks. Many months we sell out so quickly that we add a second session. It’s extremely popular and the Intro class is aimed at beginners. The Intro class covers a different pair of burlesque essentials in each class, one dance technique and one striptease technique. So, in the second class, students will learn the Grind (half of “Bump ‘n’ Grind”) as the dance move, and then move on to learn skirt and shirt removes.

What are some of your favorite burlesque troupes going right now?
I’m a huge fan of The Pontani Sisters, especially Angie Pontani, who we refer to as ‘the future Mrs. Scratch’ (even though she’s engaged to someone else). We have a friendly rivalry with the Peek-A-Boo Revue in Philadelphia — they’re enormously talented (but not as talented as we are!).  While not technically a troupe, we also really admire Trixie Little & The Evil Hate Monkey.  They’re creative and constantly reinvent themselves and the meaning of “neo-burlesque.”

Got any advice for burlesque producers that are just getting started out?
Your first show is going to be a success. All of your friends and all of your performers are going to help out for free or pay to come and see it. You can get away with banking on that goodwill once — maybe twice if you’re very, very lucky. Don’t be crushed when your third show crashes and burns. It gets better.

Many thanks to Mr. Scratch for taking the time to chat with us. You can catch the Boston Babydolls this Thursday, June 21, in Boston at The Dollhouse, their monthly dance party or catch their road-show as it rolls through Salem, Massachusetts this Friday, June 22 and Saturday, June 23 at the Griffen Theatre for “A (Re)Movable Feast.” For all their upcoming events be sure to check out their producer page or visit their website.