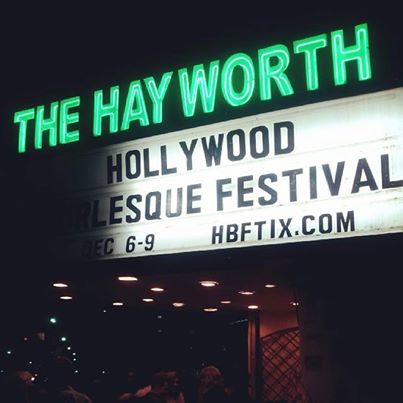 Now that the holidays have passed and we’re settling into our normal lives again, I want to, finally, post my review of the Hollywood Burlesque Festival, which took place from December 6 to December 9. Me and fellow BPT-er Michelle went down to LA for four days of hanging with the City of Angels’ best burlesque talent. It was all brought to us courtesy of the incredible Lili Von Schtupp, the woman the LA Times dubbed “The foul-mouthed, buxom Godmother of LA burlesque!”

Lili has been ticketing her Monday Night Tease shows with us for the better part of the last decade and she’s the shining example of what’s possible with a little hard work and a deep love for your chosen art form. Lili hosts Monday Night Tease every week and somehow manages to pack ’em into The 3 Clubs show room week after week, which is no small feat for a show that’s been running for almost a decade. She also runs Lili’s School for Wayward Girls and gives new talent a safe and supportive environment within which to hone their skills. The love the community feels for Lili was more than apparent during the first ever Hollywood Burlesque Festival and I have to say, it’s well deserved. 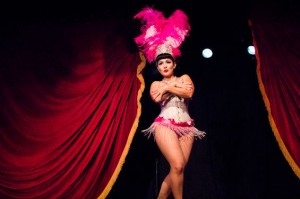 We got into town on Friday, December 6 and headed down to The Hayworth Theater in Westlake to enjoy the first night of the festival. The emcee for the night was the incredible Patrick the Bank Robber, who brought a classic comedic vibe to the show and kept things moving along seamlessly. This was one full night of burlesque so it’d be impossible for me to describe everything, but my personal highlights had to be opener Ruby Champagne‘s classic routine which was bolstered by her stunning beauty and onstage grace. Matt Finish‘s boylesque routine started with him in a gorilla suit, and let’s face it, how can you resist a gorilla boylesque routine that ends with strategically-placed bananas? Iza La Vamp did an interesting reverse striptease, which started with her baring nothing but pasties and ended with her in a lubed-up, latex dress. Mercury Troy‘s bored movie theater ticket girl routine was amazing simply for her great use of bored, indifferent facial expressions which had me rolling. Austin’s The Pecking Order (Eva 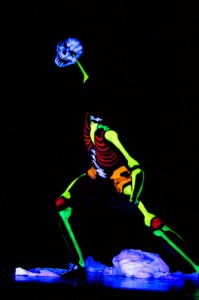 Strangelove and Justin F. Incredible) did a super sexy bull whip routine that had the audience on the edge of their seats.

After the intermission, Bobbie Burlesque did a stunning routine that started with him in full mummy wrap and ended with him as a black-lit, glow-in-the-dark skeleton which had the audience enraptured. Burlesque legend and former Russ Meyer “supervixen” Kitten Natvidad did a classic burlesque routine and boy, watching her moves, you could tell that she hails from the golden age of burlesque. She was a highlight for me as I’ve always been a big Russ Meyer fan and though, she told me later that she hadn’t done burlesque in years, I, certainly, couldn’t tell. The night finished with the always entertaining Swing Time PDX Trio from Portland, who stole the show with their acrobatic, swing-dance inspired group routine that managed to be jaw-dropping, sexy and hilarious all at the same time.

On Saturday, we popped over to The 3 Clubs during the afternoon to check out the classes and I got a chance to chat with Kitten Natvidad. As I said earlier, I’m a big Russ Meyer fan and she had tons of great stories on Meyer and her time with him. Was great to chat with a real live legend and she was hilarious. Let’s just say, she made me blush more than once and that’s not an easy task! 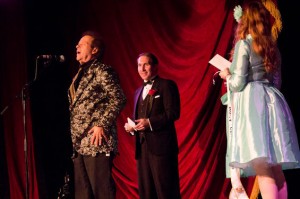 That night was the big show at the Hayworth and everyone was buzzing about the appearance of none other than Richard Simmons, who was a sponsor of the festival and would be presenting an award named after his mother, Shirley Simmons, a burlesque dancer in New Orleans in the 1940s, in person. Richard and his entourage rolled in just before curtain and this evening’s show was once again hosted by Patrick the Bank Robber.

Saturday night’s show featured some of the best acts of the weekend. Most notably was Victory Variety Hour‘s Egyptian-inspired group routine set to the Scissor Sisters. Oakland’s Honey Lawless and Gigi D’Flower did a great dreidel inspired routine in honor of the season. Jay C Handbalancer from France absolutely blew everyone away with his hand-balancing strip routine. Hands down the most amazing thing I’ve seen in burlesque EVER!! Headliner Roxi D’Lite finished things off proper with a super sexy classic burlesque routine. Then, it was time for the awards!

Richard Simmons did a beautiful heartfelt tribute his mother that had everyone in tears before awarding The Shirley Simmons Most Classic Award to dancer Maxi Millions from Phoenix, Arizona. The rest of the awards played out like this: 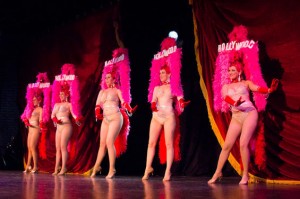 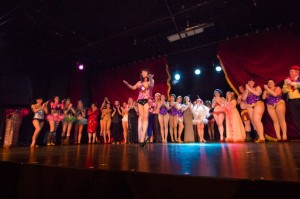 On Sunday, we went to The 3 Clubs again for the screening of Brian C. Janes film It’s All That Glitters and a “suicide karaoke” style burlesque show where Lili would spin a wheel and give dancers a choice between two numbers to do a routine to without them having any previous knowledge of what they’d get. Every dancer I saw, rose to the challenge and owned every song they got.

We did a drawing for Brown Paper Ticket’s raffle prize (a stage kit filled with booze made by local Seattle distillery Mischief, shot glasses, glitter and chocolate!) and the lucky winner was none other than Miss Hollywood Burlesque herself Sheila Starr Siani! Lili then went on to say such sweet things about Brown Paper Tickets and the room threw plenty of love my way. Certainly felt the love from the LA burlesque community that night and was so thankful of their support.

We did attend the last night’s Monday Night Tease show again at The 3 Clubs but had to cut out early as we were exhausted from such a jam-packed weekend of world-class burlesque.

I have to give a big shout out to Lili Von Schtupp for pulling off what was, seriously, the best burlesque festival I’ve been to. The bar of talent was so high and varied, the shows were seamless and the general vibe was so supportive, rowdy and inspired that is was impossible not to get caught up in it. I see big things for this festival and we’re excited to help it grow. Well done Lili! Hooray for Hollywood indeed!

If you want to check out more pictures from the festival, there’s a great slideshow on LA Weekly‘s site (which these pictures were taken from) as well as on the Daily Bulletin. Also, for more on Lili Von Schtupp, check out the interview we did with her in early December.

Want to see some of the performers from the festival? Here are some upcoming shows around the country that feature dancers that performed in this year’s festival.

Saturday, January 18 I Nerdlesque! Evil Geniuses. The Ones We Love to Hate – Las Vegas, Nevada   Nerdlesque is putting down the plastic tarps and stocking up on antidote because the ladies this month are dangerous… dangerously sexy! Some of your favorite villains are getting a makeover and will be hypnotizing you with their deadly weapons. Performing this month they have the bomb that goes off in your hand, Greta Grenade, and someone who will get your temperature up, Mercury Troy this twosome will be all the way here from sunny Los Angeles! In addition we will have our local lovelies: Jeffrey Xerxes Brice, La Rosa Muerta, Precari Ous Lea and Sarah X. Hosted by Anita Brassiere!