What’s in a Name? (Hint: Everything) 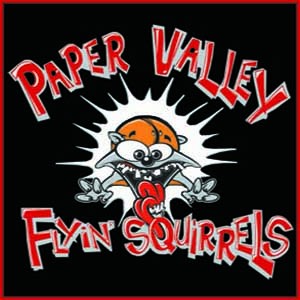 Your derby league’s look and feel affects the success of your marketing and your community relationship. A smart, calculated and yes, creative selection of your logo, league name, team name(s) and tagline is vital.

If you are not familiar with branding, think of it as a consistent look and voice that represents your league. When it comes to derby, branding gives merchandise, boutfits and marketing a unified style.

I’m a flat-out sports fan. I can identify professional teams at a glance. And it’s no accident–a group of experts choose logos, colors, team font (yes, even the typeface stands out) and taglines that fans can spot in an instant. Good branding is a must for any business and sports teams are businesses.

Lovin’ it or hatin’ it, McDonald’s is a branding machine. The signature red and yellow, arches, jingle and tagline make their ads and restaurants recognizable in a few seconds. You want to capture a consistent visual and written style that strives for a McDonald’s-level of familiarity to your community.

Let’s start with the first steps—a logo and a name. I’ll touch on all elements of branding in future posts. 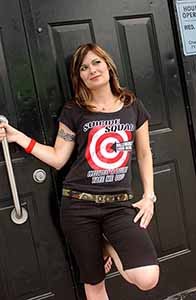 Your logo is a major part of your branding effort. It is the fastest way people will identify your league and an image that’s unmistakably you. It also should make the connection with roller derby very easy.

I mentioned in a previous blog post that I owned Flyin’ Squirrel, a derby novelty t-shirt company. I approached a Mad Rollin’ Doll’s fan to create the logo for the company. He was known nationwide for his style. He delivered my vision and my logo kicked butt. This was my calling card, my stamp. It affected how we designed the website and every piece of marketing collateral.

My logo was a tremendous success visually, but it created a few problems price wise.

The success: I was able to sell merchandise that simply had the logo on it, a goal of mine when searching for a logo design.

The problems: the logo was a bit complex, which created some small hurdles. But the biggest issue was that it comprised six colors.

If it looks cool, who cares?

Your bank account cares. Every color in your t-shirt, banners and program printing can cost additional money, depending on technology used. This is a definite when you print clothing. League merchandise, clothing in particular can be a major profit center for your league. Printing costs account for the majority of money invested in merchandise.

My merchandise company’s brand centered around one image (as it should), but my brand identifier was a profit assassin. I sponsored leagues, an actual b-team, and was printing t-shirts with my squirrel. The b-team sponsorship included both home and away boutfits. Making the team’s uniforms was expensive enough without the logo and really expensive with it. The team’s logo was so cool that fans bought loads of the shirts. But my profit was a fraction what I made on other shirts.

So what, you were still making money.

Wrong attitude. You’re a business. Weather, unexpected costs/economic downturns, time and pocket money needed from league members affect the league’s ability to survive. Spend wisely, as if it was your own cash. And remember, the non-profit model does not mean you shouldn’t make a profit.

My branding developed from that logo. The expense of traditional printing of images on clothing grows with every color. Six colors meant I could only print logo clothing occasionally. Even when I received price breaks for ordering a higher quantity, the profit was half or less than other shirts I made.

It may not just be clothing that’s affected by your colorful logo. Color copies, stickers, posters (if screen-printed) will potentially be more expensive.

The Deal with Die Cutting

Though certainly the lesser evil than the color, the logo’s shape also came with a price. If your logo has sharp features, it may not look right inside a circle or rectangle. Die cutting is a process where the vendor cuts the sticker or patch to the outline of the image.

Though I compromised to use a less expensive tagline, I chose to die cut the patches. They were great to sell and I had them pressed onto winter hats and shirts, but I had to order 500 to 1,000 of them to keep the cost down to a reasonable per-piece price. The cost was high, an amount most leagues couldn’t afford to spend, especially ones just starting out.

What’s in a Name? 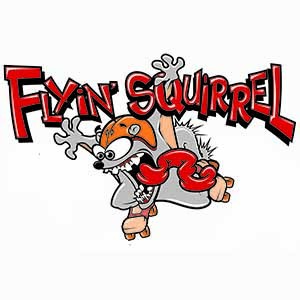 What’s not in a name? The logo may be the visual trigger, but early on, the name means more.

I’ll admit it. Coming from a business background, I don’t understand creating a league or team name that has a double meaning, is inappropriate, or represents something negative in the community’s history. There are plenty of these out there. Taglines can be as helpful or damaging as the name itself. Madison’s “Hurt in a skirt” is an example of a fun, appropriate use of words.

New derby used to be more edgy, racy and rebellious, but those comedic names created marketing barriers. Most leagues today describe themselves as family friendly. It’s increasingly important that names avoid innuendos and aren’t disrespectful. I love that roller derby welcomes open-minded, free thinkers. However, our sense of humor and irony get the best of us on occasion.

If your community finds your brand offensive or off-putting, your marketing and publicity opportunities will be limited. I won’t name names (see what I did there), but there are some teams that will never appear in local publications and newspapers. Their brand is too controversial or vile to publish. Think about it: how does the local newspaper report on the league if the league’s name cannot be used? They’ll likely skip the story.

Pick-up teams, regional teams that come together to play exhibition games or closed-door leagues can go outside the bounds with their branding. But if you’re playing in front of a crowd, being covered by media or receiving acknowledgement for charity or community work, craft your brand for the mainstream.

Prepare Your League for the Long Haul

If there is one piece of advice to take away from this entire blog series, it’s that you should take the time you need to prepare your image and build a foundation that will support your league for generations to come. The sacrifice? Playing the game publicly may happen later than members would prefer.

Remember, you can play whenever you are ready; just don’t open the doors publicly until your business is prepared. Marketing and public relations will hit the ground running the moment the league is announced.

If playing to the mainstream is what you desire, make sure your brand won’t hurt profitability in pure cost or the cost of negative public opinion. Back tracking to fix your brand image is a long process. It can take years to win back community love after a branding snafu, so craft your image carefully from the beginning.

What are your biggest derby branding challenges? Don’t be shy–comment below.