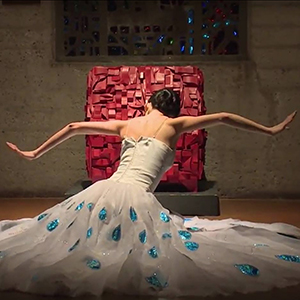 Sure, summer has a well-earned reputation as “festival season,” but winter is an excellent time to gear up and go out. Tickets tend to be cheaper, crowds aren’t as sweaty, and nothing chases away post-holiday winter doldrums like live events. Plus, cocoa.

It’s back, it’s bigger and features new work and an additional venue. This year, the Movement Arts Festival takes place at the Cathedral St. Mary of the Assumption on January 13 and at the Grace Cathedral on January 20. Stations will feature movement choirs, spoken word, chanting and of course, dance.

Why we picked it: Instead of a traditional arts festival where all attendees watch the same performance, SMAF is farmer’s-market style. Visitors walk around at their leisure to catch the various performances. The festival’s unique format lends the opportunity for audience members to connect to (and be moved by) movement arts. How often, in this rapid-paced world, do we get to experience dance and theater in our own way, at our own pace? Get tickets for both events or one.

Get out of your sit-at-home Netflix snooze fest and see live theater. Held at the Hudson Guild Theater, Winterfest in New York caters to nascent playwrights, actors, and producers and offers a buffet of indie theater, along with a dose of friendly competition. Buy tickets for one or all of the performances.

Why we picked it: Part festival, part theater competition, Winterfest gives away prize money to best play, best actor/actress, best musical score, and so on. Plus, there’s certain magic to catching independent New York productions while snow swirls outside.

It will be cold, it will be very cold (ahem…. Buffalo, NY in Feb). But who cares? The $5 fair includes a chance to get up-close with well-recognized psychic mediums and talk to vendors. (Private readings are available at an additional cost.)

Why we picked it: It’s a psychic fest, early in 2017, ideal timing for those who want a look into the year ahead.

The Chandler International Film Festival offers a year-round award competition and an annual festival featuring over 100 “unique, creative, and diverse” international films. The goal of CIFF is to “support creative, emerging filmmakers from all over the world and their projects.”

Why we picked it: Arizona isn’t exactly winter wonderland, but January is the ideal time to get a healthy dose of sunshine and see as many movies as you can stuff into a weekend.

Chow down on chowder, sip wines and microbrews, watch waves roll in on the California coast. During the whale festival, chefs will have “a chowder off” where the crowd gets to vote on best chowder.

Why we picked it: Winter at the beach is woefully underrated.

When cold weather strikes, rather than shutting inside; bundle up and get out there. That’s what Fargo, ND decided to do with the Frostival, a two-day festival with all kinds of winter activities, including sleigh rides, a snowman toss, snowga and competitive, cold-weather tournaments, such as snow volleyball.

Why we picked it: We admire the spirit of this whole thing. If you can’t beat frosty weather, play in it.

Rain, rain won’t go away, for another two months in Seattle. How to deal with the gray days? Beer is best and those who prefer Belgian brews should head to this fest, which highlights over 100 beers crafted by Washington breweries. There will be Tripels, Dubbels, Saisons, Wits, Abbeys and Lambics; all beers brewed with Belgian yeast.

Why we picked it: Beer.