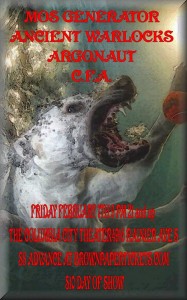 Mos Generator formed during the winter of 2000 in Port Orchard, Washington from the ashes of a ten year off & on collaboration between it’s three members, all of which are long time veterans of road & studio. The need to strip down to the basics of hard rock was apparent from the start and continues to be the foundation for all the band’s recent material. Mos Generator have released five studio albums, a retrospective album, and a live album on such labels as Roadburn, Small Stone, Ripple, Nasoni, and Lay Bare. Touring has been just as important to the profile of the band as making records has. Over the years Mos Generator has shared the stage with many great heavy rock bands and in March of 2013 they did a 26 date European tour with Saint Vitus, opening up a whole new fan base to the Mos Generator sound. On stage the band defines the word chemistry; revolving their sound around swagger and groove while improvising just enough to keep the songs feeling fresh from night to night…sometimes with interesting results.

Currently Mos Generator are working on a new record to be released in the spring of 2014 on Listenable Records with a European tour to follow in May. So far the new material is stretching the core sound of the band into some new and interesting directions. “We always try and push the heavy rock sound into other areas. Sometimes it’s forced and sometimes we are letting natural and honest influences enter the equation. On the new material we are letting ourselves be open to whatever comes along.”

The Round is…three songwriters share the stage together with slam poets and live painters/visual artists, joined by a mix of improv backing musicians for a relaxed evening of unique collaboration.

A passionate lifelong Elvis fan! Anthony Shore was born and raised in London, England.Traveling to many destinations across Europe’s Mediterranean to perform his award winning Elvis show, including Spain, Tenerife, Cyprus, Germany and France, Anthony honed his skills in Salou, Spain working for an entertainment company, performing over 700 shows a year!

Anthony is a passionate entertainer and has a vocal ability that is second to none in the Elvis world! Anthony is hardworking and very approachable (as those of you that have met him will already know). Anthony’s stage demeanor is always respectful to Elvis! Anthony is funny, charismatic and charming and always endeavors to win the hearts of his audience.Anthony is only one of the few Elvis Tribute Artists in the world to have been able to sustain a full time career performing as Elvis.

He considers it an honor to be able to do what he does best and to meet all of the fantastic people over the world…..Here’s to many more years!

Though 27 year-old Marissa Nadler has a background in visual arts at the Rhode Island School of Design, she has since made a career as a musician. It’s not surprising to find Nadler crafts music with melodies and lyrics steeped in rich imagery and beautiful textures. With a sound somewhere between the hazy melodies of Mazzy Star and the folk sensibilities of Vashti Bunyan, Nadler pieces together beautiful, dreamy folk music on her fourth solo album, Little Hells. With the help of a trio of talented musicians, Nadler’s new release boasts an even richer sound.

Nadler’s music may contain less ‘freak’ folk or experimental elements than much of the music evolving from the folk scene today, but it is no less relevant or intriguing. The synthesizer, organ, and lap steel layer nicely with Nadler’s ethereal voice and give her music a sound that is somehow both melancholy and triumphant. Ranging from ghosts, angels, and dead flowers to running away to join the circus, the topics on Little Hells are just as eerily beautiful as the music. – NPR