The Glenn Miller Orchestra has always been very musical, disciplined, and visually entertaining.  And it has its own distinctive “sound.” That sound is created by the clarinet holding the melodic line, doubled or coupled with the tenor sax playing the same notes; and the harmonies produced by three other saxophones, while growling trombones and wailing trumpets add their oo-ahs.

Glenn Miller and His Orchestra made a big impact right before and during the war. It had more hit records in one year than anybody in the history of the recording industry. In fact, its recording of “Chattanooga Choo-Choo” earned the first Gold Record ever awarded to a performing artist.

Back in the days of the big band era of the forties, any dance band “worth its salt” had a distinctive theme song. It was the musical signature with which they signed on and signed off at their engagements and radio broadcasts. The theme of Glenn Miller and His Orchestra was the beautiful “Moonlight Serenade”, and it is still the signature tune of the Glenn Miller Orchestra today.

Pathways takes audiences on a journey through the lives of some of the most engaging, dynamic and successful African American women in our history.

In fast moving and always engaging scenes, actress Brenda Porter becomes a series of feisty African American women who have left their marks on history. They include Stagecoach Mary, Ida B. Wells, Harriet Tubman, Bessie Coleman, Edmonia Lewis, Wilma Rudolph and Barbara Jordan. They are sometimes funny, always daring and they offer inspiration to young women and men of today.

Through Pathways, the audience members are exposed to women who have often been overlooked or marginalized by history text books – women who overcame difficulties and pushed beyond the boundaries of “ordinary” lives to break new grounds in the areas of sex, class, politics, culture and economics. Brenda hopes to challenge people of today to do the same and the show encourages audience members to study, read and learn about the many outstanding individuals who have created pathways for us.

This very special production pays homage to all of those who have laid paths for us to walk and run upon.

Out of crisis comes radical experimentation. Few cities have hit rock bottom as Bogota, Columbia did in 1994, ravaged by the violence and corruption of the war on drugs. Bogota Cambió tells the story of how two “crazy, extraordinary politicians,” Antanas Mockus and Enrique Peñalosa, road waves of public discontent that enabled them to transform the city, break the old political system and upend approaches to public safety, transportation and the use of public space.

Bogota Cambió is also the story of the politician as performance artist and performance as public policy, of mimes, superheroes, and the marriage of extreme contempt with extreme submission. Director Andreas Møl Dalsgaard’s debut film, Afghan Muscles (2007) won Best Documentary at the AFI Film Festival.

Thin Lizzy are an Irish rock band formed in Dublin in 1969. Two of the founding members, drummer Brian Downey and bass guitarist/vocalist Phil Lynott, met while still in school. Lynott assumed the role

of frontman and led them throughout their recording career of twelve studio albums. Thin Lizzy are best known for their songs “Whiskey in the Jar”, “Jailbreak” and “The Boys Are Back in Town”, all major international hits still played regularly on hard rock and classic rock radio stations. After Lynott’s death in 1986, various incarnations of the band have emerged over the years based initially around guitarists Scott Gorham and John Sykes, though Sykes left the band in 2009. Gorham later continued with a new line-up including Downey. 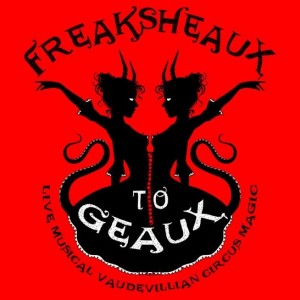 From deep in the humid and lurid swampland known as New Orleans comes Freaksheaux to Geaux – a vaudeville show of a dark and lascivious nature. A delicious gumbo of music, circus, sideshow, burlesque, and more, the Freaksheaux will bring you back to the traveling shows of yore, with a Southern Gothic twist and some modern flavor. It’s no surprise that they regularly lure some of the best and the brightest in the vaudeville revival down to the Crescent City for good times and bad behavior.

For this special, metal-inspired boylesque show, get ready to rock out with your c*ck out! Or to at least watch some talented and daring dudes do so for your entertainment!

Woo the Clown, Chris Wecklein, and Mistress Kali are bringing you something that you not only haven’t seen before, but also that you’ll never be able to un-see again! Metalesque, the most b*lls to the wall (possibly literally) burlesque you will see this year!