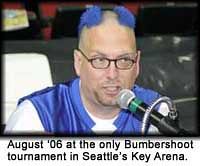 Josh Gates opens his show, “Destination Truth” by saying: “In my travels, I’ve experienced some unexplainable things, and I’ve done some things I can’t quite explain.” So, I’m going to us that as the perfect opening for this blog post and an overall description of my derby career.

A rich and anecdotal history revolves around today’s topic… my hair. Specifically, the lack of it. I’m my own hair stylist! I know, it’s hard to tell. Early on, I was renown for flamboyant (a fancy word for “stupid”) hair cuts that changed with every bout. I’ll admit, I got tired of the effort and my kids were tired of hiding from Daddy. So, it’s on a rare occasion that I do anything unusual to my hair these days. This is the set up for a recent rare occasion. With my hair being the focal point of this post, I think a little “history of the hair” is in order. This isn’t even close to the sampler platter of the “Atrocities to Bob’s Head” menu. 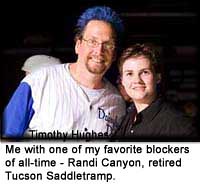 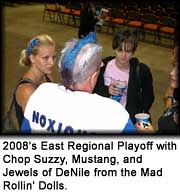 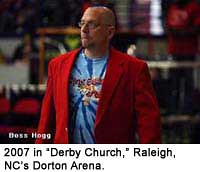 I was in Lincoln, NB, last October for the South Central Regional Playoff Tournament. Truth is, Lincoln is neither South nor Central, but every major sport has a few misplaced teams. The second day of the tournament was a little sleepy and the teams needed something significant to play for – because advancement to the National Finals wasn’t enough (yeah, smell the sarcasm). Moments before the Kansas City Roller Warriors were to play my Atlanta Roller Girls, I had a brilliant idea. I’d bet my hair on this bout with KC’s announcer, Duane Cunningham. Duane is a peer and friend going back to the Neolithic Era of the sport. Whichever one of us represented the team that fell short (nobody ever really loses! Lost, losing, losers are erased from your vocabulary the moment you work for women who hit each other, on skates, purposefully, for fun) would shave their head and facial hair before the next day’s start. Eyebrows would be spared. This is rule # 4 of Shave Club.

Duane was a newlywed, so, with only minutes before the start, he franticly negotiated on his cell with his new wife. Time ticked away dangerously and the discussion appeared to not be in his favor. He left his chair, ran backstage, then ran back in time to introduce his team. I looked at him unsure of the result, and with a shrug asked, “What did she say?” “She said Kansas City had better win!” Game on!

Anyway, punchline? Atlanta fell short to KC. I cared because I was pulling for them, and the cost was not a big deal to me…until later in the evening. The electric sheers were packed with my bags, but I was out of razors. I learned an important, ugly lesson, that evening – Lincoln rolls up the side-walks and stores close earlier than… anywhere. It was 9 or 10 pm on a Saturday night and nothing was open. I couldn’t buy razors.

I’m a man of my word, so, head hung low, I approached the hotel desk cringing and stuttered:
“Do y-you have any sh-shaving cream and r-rrazors?”
The desk clerk blinked;”Did you say razors?”
“Y-y-yes,” I stammered meekly.”
“Certainly sir, let me get you some.”

For those who have never used a hotel razor, it’s as close to accidental suicide as you can get. Single-blade, sharp as a brick, and resulting in nearly a roll of those little toilet paper compresses. But now, to keep my promise, I shaved not only my face, but my head. It turned out worse than I had feared! 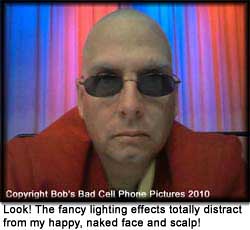 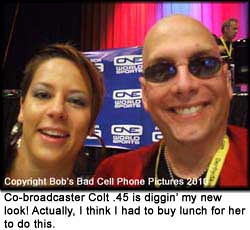 After three razors, my dome looked as if I had poked my head into a commercial fan: bleeding, swollen, and razor burned. I ran cold water over it for 15 minutes to close the cuts and keep from losing another pint. As the burn kicked in more intensely, I made the worst possible decision in that situation. My eye caught a glimpse of the hotel skin lotion. LOTION! It’s made to relieve dried skin! Uh, it’s also very alcohol based. I had this Wile E. Coyote moment where I rubbed the lotion onto my head and in mid-application had that split-second realization of what I had just done. Then, of course, the cliff’s edge fell out from under me. The burning was now a forest fire. Tears welled up in my eyes, I clenched my teeth so I wouldn’t scream and waited for the shock to slowly subside. When it did, I put a towel over my pillow, gently lay my battered melon onto it, and somehow, drifted off into fitful sleep.

The next morning, I woke up to moderate discomfort, but nothing I couldn’t live with. The towel and pillow, however, prompted hotel management to call CSI Lincoln. 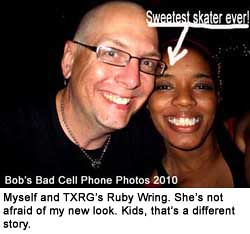 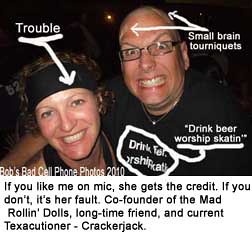 Duane had hair the final day of the tournament, I didn’t. Lincoln, NB, would have to see my bald head and face. The ladies from Atlanta, appreciating my efforts, bought me a gift for the final day – a wig. How sweet is that? 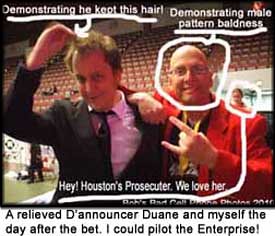 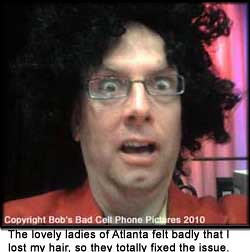 That’s derby for you. They wanted to win that bout…badly…but felt bad I had to give up my hair. I look at this way; I lived to tell the story, and had they not played, there’d have been no bout, no hair debacle, and no blog to share. Just another day in the life…