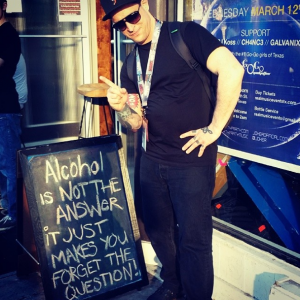 South by Southwest. Stretched over 11 days at countless locations in the capital of Texas, this must be the largest event of its kind in the US. So many different voices from seemingly disparate worlds of technology, film and music all shouting above the other in an attempt to be heard over the near constant cracking of high 5s from fans. It can be polarizing, overwhelming and exhilarating.

A Brown Paper Ticket team was on the ground in Austin to keep the peace, spread the good news about affordable, full-service event ticketing and stay awake long after the party to bring you all of the dirt.

Trade Show Tech Talk
It all started with a 4-day trade show showcasing the most current and cutting-edge in entertainment technologies. Smart and shiny gadgets and displays, to be sure. But a lot to digest. Hot on the lips of most visitors to the Brown Paper Ticket’s booth was the topic of APIs and digital integration. Luckily, Brown Paper Tickets offers a bevy of developer tools and options for integrating our services into your platform. 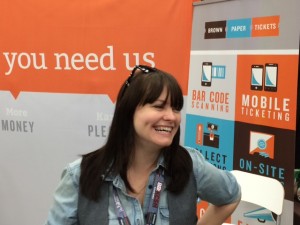 If you want to learn more, contact us at support@brownpapertickets.com.

Film Geeks
Then film geeks rolled in. Thousands of movies from all genres garnered long lines and generated lots of buzz throughout the convention center venues, cinemas and theaters around Austin. Not one to pass up a controversy, I attended the 4K scan of the Texas Chainsaw Massacre. Seeing the cult classic in the setting of its namesake with the creator in attendance was just too good to pass up.

Music, Metal and Feet-Filled Streets
As the trade show ended and we packed up our booth, down time was imminent. Boy were we mistaken. One million people seemed to descend upon downtown Austin, packing streets and sidewalks with raucous festival-goers all seeking sonic satisfaction. Having a head full of music myself, I quickly became ensconced in the never-ending tidal wave of band after band, venue after venue. I must’ve walked 40 miles hitting more than 50 venues over the next 4 days. 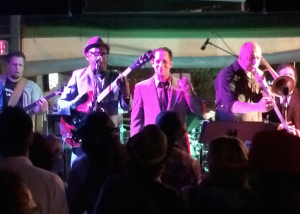 I have a penchant for the heavier stuff, so made it a point to check out a couple of bands that have used Brown Paper Tickets services along the way. First stop was The Dirty Dog to see local Olympia/Seattle favorites Christian Mistress. If old-school, witchy-heavy metal is your thing, this is your band. It’s great to see a band still delivering the darkness.

Later, I found myself again at The Dirty Dog to catch one of the most talked about live acts of the year, Whores from Atlanta. Trust me when I tell you that the energy coming off of these dudes is enough to make you lose your face right there in the club. Malevolent and hyper, if you can only see one live band this year, make sure you catch this one. They’ll make you smile and yell.

Directly after having my brain scrambled by those crazy Atlantans, I hopped straight into a pedicab and sped off to my own gig playing percussion with legendary Lynval Golding (of The Specials) and fellow Brown Paper Ticket colleague and music maven, Billy Geoghegan. At this point in the evening, I was really thankful for sensible shoes.

As the next day came and went, so did the SXSW festival. 11 days had passed in a whirlwind and on day 12, it was pleasantly quiet. We had just lived through what is most certainly spring break for the entertainment industry.

Austin, may we meet again next year.

Live well. But don’t be foolish. Like the drunk driver who, at this year’s SXSW event, killed and injured people in a shocking tragedy. It happened a mere 2 blocks from our hotel. To support the victims, you can donate to SXSWcares. Carpe diem. Life is short.

Post by Eric Peterson, Brown Paper Tickets client services tech manager. He began playing drums at age 8 and began working events in his teens. Eric has played with many artists on many stages, most notably the notorious Electric Hellfire Club.