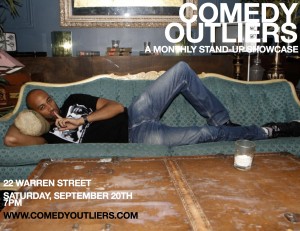 Another guest post by Brandon Collins and Mike Brown of Comedy Outliers. They offer advice to comedians and performers on how to survive and thrive in today’s competitive artistic climate.

Stand-up shows are pretty straight forward. You have a host, you have a few comics go up and perform and then usually there is a headliner who does extended time to close the show on a high note. This can seem like a fairly simple formula, one relatively easy to execute. While some producers put more effort into perfecting this formula than others, there are always ways to shake things up a little bit and add some unpredictability to your show.

In the art world, fall is in full swing and for us at “Comedy Outliers” that means we get to start producing our themed shows. During the first half of the year, our show follows a specific outline that we have perfected over the two and half years we’ve been producing. During the second half of the year, we have producer Mike Brown and customer service manager Tatiana Albandos’ birthdays so we get to bring more of a party vibe to shows. Not to mention additional shows with a Halloween and winter holiday theme. These shows allow us to have a loose format, which includes performing sketches, musical numbers and even bringing in guest musicians to add a different kind of vibe. The addition of live musicians is always a hit with our audience as it is much more engaging than simply plugging in your iPod for show music.

It’s very easy to get comfortable and complacent when producing a show. But you should never be afraid of switching things up and keeping your audience excited for the next event. In the end, you should do what you feel makes your show work. However, as you continue to grow your production, you should begin allowing yourself more freedom to have more fun and in some cases get incredibly weird.

Comedy Outliers’ next show is at 22 Warren Street on Saturday, September 20th at 7pm. The show has a $10 cover with no drink minimum. Pay only $5 for advanced tickets if you use the discount code “Rasta” for $5 tickets.You can also support their efforts by hitting the “Donate” button on their website or by listening to their weekly podcast.