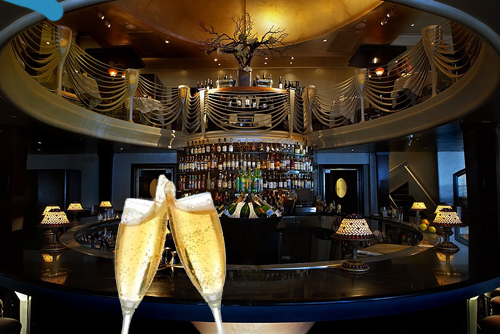 This week our resident foodie Patrick is taking some time off with his family so I’m filling in. I, unfortunately, am not the well-spring of delicious recipes that Patrick is so I’ve decided to focus on Foodie friendly New Years Eve events coming up around the country on Monday, December 31.

I’m sure all of you are sick of cooking anyway after Christmas. New Years is a perfect time to relax, let someone else do the cooking, have a few cocktails (or “mock” tails) and reflect on another year gone by. On this list, we got seafood in Seattle, Bolivian cuisine in San Francisco, Asian barbecue in Chicago, craft beer in Houston, southern food in DC and a whiskey pairing dinner in the Big Apple. Plus, plenty more delicious events. For a full list of New Years Eve events in your neck of the woods, be sure to visit our website. Happy New Year everyone! We’ll see you in 2013.

New Years Eve @ The Backdoor Sponsored by St Germain – The Backdoor‘s first New Years dinner seating starts at 5pm and will feature a three course meal with a drink. The menu will include a wild mushroom ragout over a spice polenta cake with roasted root vegetables, a hazelnut salt-crusted rack of lamb with a port reduction, pommes ducheese, scallops, king crab legs, and a prawn skewer with a wild rice pilaf. Drink specials include a Hot Charlotte with muddled cucumber, gin, St Germain, lemon and Tobasco; a Katie May with vodka, St. Germain, grapefruit and bubbles; a Connection with St. Germain, pear brandy, lemon and bubbles and an Old Germain with bourbon, St. Germain, orange and Angostura bitters. Entertainment will feature magic by Just Sage, tarot readings by French Walker and music by Eric Fridrich. The 9pm seating will include appetizers and desserts with entertainment by DJ Sid Licious, magic by Just Sage, tarot readings by French Walker, music by Eric Fridrich, burlesque by Cherry Manhattan and a midnight St. Germain toast.

New Year’s Eve Party – Come join Local Mission Eatery for a celebration of the year past and the year to come. Everyone is invited at 8:00 for bites, a Vermouth cocktail and a mingle with friends and neighbors.  At 9:00, guests will be seated for a three-course dinner. Knead Patisserie will serve passed desserts in the late evening. At midnight, guests will toast the New Year together with sparkling wine. Festive attire preferred.

New Year’s Eve Sit Down & Git Down – SmallBar Division presents Sit Down & Git Down, their 2013 New Years event featuring a celebratory SIT DOWN 3-course dinner with full drink pairings and one bottle of complimentary bubbly per couple. At 10pm they’ll open the doors wide open for their annual no cover, no reservations GIT DOWN with Dj Intel and Dj Pickel of The Comeups. As always, they’ve got the cure for what ails you on Tuesday, January 1 with their Hangover Brunch. They’ll be open at noon with a full brunch menu served until 4pm plus mimosas, bloody marys and all that you need to get 2013 started off right!

Three Belly’s Under One Roof: belly’s Eve – bellyQ invites all “belly”-enthusiasts, whether bellyQ, Urbanbelly or belly shack, to toast to 2013 at bellyQ this New Year’s Eve. For the first time, Chef Bill Kim will be serving up flavorful fare from all three restaurants under one roof with several stations, including: Dumpling Domain: an imaginative take on dumplings; Belly Shack: Asian / Latin fare; Urbanbelly: bites from the mouthwatering noodle and dumpling restaurant; Asian Pizzeria: pizza with Chef Kim’s signature twist; Dessert Coma: soft-serve ice creams with custom toppings and Sake Station: sip an assortment of sakes.

A Craft Beer New Year – The League of Extraordinary Brewers Presents a Craft Beer New Year. a League of Extraordinary Gentleman-themed party that will begin with a beer pairing dinner true to the steampunk theme at 7:30. Guests will feast on a modernist rendition of Queen Victoria’s Banquet Table and the League will pull out the best beers to go with it. At 10 pm doors will open to party goers for rare tastings of beer for the New Year, craft hors d’oeuvres complete with a “Champagne Yeast” midnight toast. They will also have hot air balloons to launch into the night sky at midnight!
This is party is a costume ball, so please indulge your creative side.

Columbia Station’s Jazzy New Year Celebration – Come and celebrate the beginning of the New Year in style at one of DC’s historic jazz and blues clubs. They will be featuring two, three-hour seatings where you will be able to enjoy a three course meal and a glass of champagne all while enjoying Columbia Station‘s famous live jazz performances. The menu will include a choice of filet mignon with a side of mashed potatoes, salmon, or chicken pasta. Each guest will receive a glass of champagne with their dinner.

Sparkling Seafood New Year’s Eve – Ring in 2013 with sparkle! Your New Year’s Eve starts at 8 p.m. with a dinner that features oysters, shrimp, crab, lobster rolls, chowder and sides. You’ll get unlimited pours of sparkling wine, cider and special bottle-conditioned beer until the midnight toast! That’s four hours of ringing in the New Year at Jimmy’s No. 43.