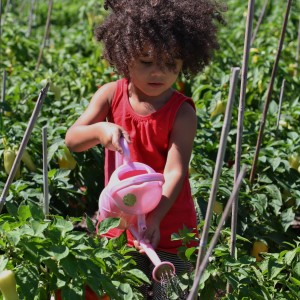 What do kids, farms and the Big Apple have in common? You. From May 1 through June 30, 5 cents per New York City event ticket sold will be donated by Brown Paper Tickets to New York-based City Growers. This nonprofit, sprung from Brooklyn Grange (a rooftop farm and green roofing company), educates kids from schools in all 5 boroughs about nature’s nourishment.

Our goal: Fund at least one City Growers urban farming class for kids.

Children, teens, teachers and parents all learn urban farming techniques, pluck produce, touch worms and connect with the environment in other hands-on ways. Since its founding in 2011, City Growers has brought more than 10,000 kids of all ages to their rooftop farms for educational excursions and workshops to learn about earth science, nutrition and sustainability—and get in touch with local food supply roots.

City Growers’ website says it all: “We’ve seen the most sullen teenagers light up with wonder in our farm education programs.”

Brown Paper Tickets is the only Not-Just-For-Profit event registration and ticketing company and takes community service to heart. We give back to local areas we serve and are proud to support City Growers. Our local New York City event staff has worked with Brooklyn Grange to ticket their growing array of events—workshops, farm tours, yoga classes, dinner parties, weddings, corporate retreats—at their rooftop farms in Queens and Brooklyn (both venues where City Growers holds programs). We’re also opening a New York City office this summer in Long Island City (same neighborhood as City Growers).

Support kids’ nutrition, food and environmental education. Buy tickets via Brown Paper Tickets to any New York City event during May and June (May 1 – June 30, 2014) and we’ll donate part of our profits to City Growers. Events must be in New York City limits (including all 5 boroughs). In early July, we’ll report back on results.