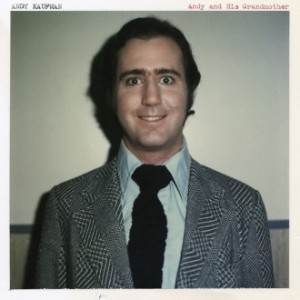 In true Kaufman style, it’s not a comedy album in either the stand-up sense or the audio-sketch sense. But given his renown for a certain type of conceptual prank that has come to bear the unfortunate moniker of “anti-comedy,” it’s fair to ask if Kaufman would have wanted anything to do with this relatively straightforward, 17-track sampler, since it was culled from a staggering 82 hours of micro-cassette material that Kaufman recorded between 1977 and 1979 (during his Saturday Night Live fame but pre-Taxi and wrestling with ladies).

Andy and His Grandmother exists because of Wonder Showzen co-creator and Adult Swim regular Vernon Chatman, who selected the material here, editor Rodney Asher (director of The Shining conspiracy-theory doc Room 237) and, fittingly, SNL short-timer Bill Hader, who “narrates” a few of the tracks. On the surface, it’s a patchwork of recordings that Kaufman made of himself fucking with people, documenting their annoyance or anger, their quiet and bemused moments, or even their postcoital ones (as on the quietly poignant “Slice of Life“).

The tracks that include his actual grandmother making sure he doesn’t want some gefilte fish or telling him she loves him are pure charm. The collections of angry people telling him to turn off his tape recorder, or to shut the fuck up as he’s being forcibly removed from a movie theater, were probably deviously hilarious to Kaufman at the time. Others present slightly different versions of classic Kaufman acts, including him hammering away on a sound or rhythm with a tribal intensity, or goofing on animal sounds.

Overall it’s quick and clean, and Hader’s straight-faced narration only adds to the bluff. But it also dips into Kaufman’s twisted side, as when he taunts prostitutes for a date (which to him means bowling and a pizza), or when he takes his grandmother for a drive and tries to convince her that his car can steer itself. His grandmother’s frightened cries of “Andy, could you hold onto the wheel?!” dip into the kind of psychotic, quasi-suicidal adrenaline well Kaufman was probably feeding from at the time.

If Kaufman were alive today it would be fodder for a podcast or comedy-reality show like Nathan For You. But since he recorded this stuff apparently without any intention of releasing it, it’s more like a collection of maniacal private jokes made public, and more evidence that what was funny to him might also be funny to others who like their comedy absurd and relentless.

Even if it’s not Kaufman’s great lost stand-up set, it’s got enough of his lunacy, darkness and utter randomness to sit alongside his best-known video material. And who knows? If this sells well enough we might get another volume. Or twelve.

Saturday, August 3 I Jimmie Walker at Rochester Eagles Club – Rochester, Minnesota  Rising from the streets of New York’s ghettos to television superstardom, Jimmie Walker personifies the great American success story. His catch phrase “Dyn-o-mite!” is part of the modern vernacular, and he became such a major celebrity in the 1970’s that Time Magazine named him “Comedian of the Decade.

Saturday, October 26 I Rachel Feinstein at The Comedy Shoppe – Parsippany, New Jersey  Rachel was a finalist on Season 7’s Last Comic Standing and was featured on Russell Simmons’ Live at the El Ray, TBS’s Just for Laughs series and Comics Unleashed. Rachel has written for The Onion and has voiced various characters on Adult Swim’s Venture Brothers, the animated Comedy Central web series, Samurai Love God and Spike TV’s Battle Pope. She has also been seen on E! And CNN’s Not Just Another Cable News Show.