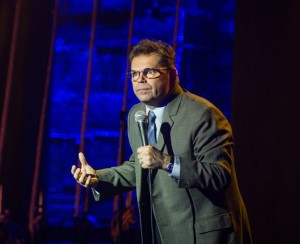 It’s almost a shame that stand-up lent Dana Gould to The Simpsons for seven years. The 49-year-old is a one-of-a-kind comic who masterfully blends impeccable histrionics with equally astute writing to create a truly unique performance. And in his newest special, I Know It’s Wrong, Gould shows that he hasn’t yet lost a step, delivering one of the most inventive and consistently entertaining hours of comedy of the year.

Sporting a jacket, tie and vest, and performing on a barebones set, Gould opens by remarking that he was born nine months after the Kennedy assassination, “which tells you all you need to know about how my father processes grief.” When watching the footage, Gould observes, “If he misses, I wouldn’t be here.” Gould then explains that he will tell an AIDS joke, a rape joke and a 9/11 joke, which he uses to segue into a bit about his father: “Archie Bunker without the elegance and sophistication.”

It’s worth noting how structured Gould’s performances are, and it’s in his segues that he’s able to conjure and preserve his unyielding momentum. Rarely, if ever, does Gould pause between bits to change course and bring up an entirely new topic. Instead, out of a bit he pulls a thread that he’s able to weave into the next, a maneuver he continues throughout the hour. And within those bits, Gould paints stellar portraits of people, events and stories, with which he’s able to immerse the listener deeper and deeper into the performance. When meeting Bob Hope, for example, Gould says the USO entertainer’s “old man arm” felt like “a sweater full of light bulbs,” and that his eyes “didn’t look like eyes,” but rather “soup with eyes in it.”

Moreover, throughout the performance Gould plays with his voice, wildly gesticulates and makes faces in service of enhancing the joke. Yet he’s not an over-performer. Gould strikes the perfect balance between writing and theatricality so as not to drown the jokes in distracting behavior, but instead elevate them via remarkable synergy.

Gould’s also not afraid to test his audience—to go extended stretches without delivering a laugh. He enjoys playing with the tone of the performance, shifting into a sullen, downbeat tenor to create extraordinary tension, which he then expertly snaps with just a few words. “My favorite part of that bit,” Gould says after such a tactic, “is about halfway through when you guys start going, ‘What’s happening? What’s going on? Is it his mother? Is he having a stroke?’”

And while Gould is certainly at home talking about himself, he’s more than willing to construct bizarre and outrageous scenarios, like John Lennon sleeping with a cicada who has ulterior motives, or two KKK members debating the power of Dracula. Even the comparatively frivolous material, though, is all in service of the greater joke—of the themes and messages that are so expertly woven throughout the hour.

Gould is without question one of the preeminent comics of his era. And I Know It’s Wrong is further evidence why.

For more top talent from the comedy hotbed of Boston, check out:

Saturday, December 14 I Katie Goodman – New York, New York  Comedian and on-line celebrity Katie Goodman captivates her audience with her unique style of raw humor and gutsy original musical satire. An internationally touring musical comedienne, Goodman is known for providing an audience with an act that is political, personal, and wildly entertaining. Honed to a razor sharp edge, her recently released first solo album, I Didn’t F*ck It Up, received enormous praise from Punchline Magazine, who put it best: “On par not just with any woman in modern comedy, not just with any music act in modern comedy but, categorically on par with anyone working the current comedy scene… Impressive…Magnificent.” Katie holds nothing back on stage. Her charming-yet-challenging style and material appeal to both men and women and you can take a sneak peak at her hijinx on YouTube, particularly with the hit, I Didn’t F*ck It Up, which is sweeping the nation.

Saturday, December 28 I Robert Kelly – Parsippany, New Jersey  Kelly’s unique, honest take on his own life and his relationships makes his comedy clever, abrasive, funny, but yet refreshingly vulnerable. Kelly has traveled across the country in the Tourgasm Live tour with Dane Cook and Gary Gulman and has performed at the Just For Laughs Festival (Montreal 2010). He was recently seen as Louie CK’s brother Robbie on FX’s Louie. His other credits include Comedy Central Presents Robert Kelly, Tourgasm on HBO, Jimmy Kimmel Live on ABC, and Premium Blend on Comedy Central. He also produced and starred in his first short film Cheat which debuted at The Tribeca Film Festival in New York. He also has a book coming out based on the movie and a top rated podcast called You Know What Dude? that can be found on iTunes or riotcast.com.

Friday, May 16 I Ira Proctor and Will Noonan – Lewiston, Maine  Ira Proctor is a Boston-based comedian that has traveled everywhere from Las Vegas to Afghanistan to perform comedy. He recently performed to rave reviews at the prestigious Just for Laughs Comedy Festival in Montreal, was featured on The Today Show, and finished up his second season of NESN’s Comedy All-Stars. He was the local winner in Boston of Sierra Mist’s Next Great Comic Search, has become a fixture in the annual Boston Comedy Festival, and has appeared on Comedy Central’s Laugh Riots. Ira’s other credits include XM Radio along with commercials for Diet Pepsi, Harvey Windows and Bob’s Discount Furniture. Boston comedian Will Noonan was recently named a “2013 Comic to Watch” by The Boston Globe Magazine. He has been featured as a comic on MTV’s FNMTV and, like Ira Proctor’s, his bits are regularly played on XM Radio’s comedy channels. He has also told a story on NPR’s weekly program, This American Life. His podcast, High Pathetically with Will Noonan, does huge download numbers, and Will has proudly performed at many of New York and New England’s finest comedy clubs, theaters, casinos, and college campuses.