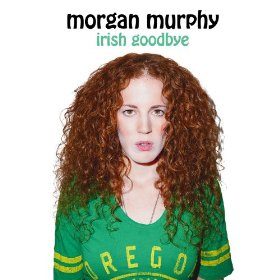 Morgan Murphy knows how to write a joke. She’s a Twitter phenom and has written for 2 Broke Girls, Late Night with Jimmy Fallon and Jimmy Kimmel Live. She’s got a great comedic mind, and it’s clear why she’s done well for herself as a TV writer—her jokes are smart and her material covers, with equal weight, Planned Parenthood and How To Lose a Guy in 10 Days.

But her first release, Irish Goodbye, is a reminder that a collection of good material doesn’t necessarily make for a great hour. The special, recorded at the NerdMelt Theater in Los Angeles, feels small and decidedly unglamorous, with the lighting rig visible above the stage, a basic black curtain behind her, and the audience visible in nearly every shot.

It’s the best type of space to see stand up live, but it’s a reminder why most specials are taped in big, bright theaters—the intimate vibe doesn’t necessarily translate to film. Instead, it only highlights what might only be a nagging suspicion in another venue—that this material isn’t quite ready to be in a special.

Just as with her show at the similarly dark, understated Upright Citizens Brigade Theater last year, Murphy’s low energy-style doesn’t propel the hour (or in this case, 50 minutes) along, and so the special never quite gains momentum.

Morgan sometimes seems stuck between styles. She doesn’t have the singular, absurdist viewpoint of a one-liner comic, but she also doesn’t develop enough of the relatable personality of a more traditional standup. That, in particular, is a shame; by far her strongest material is her most personal. A joke about having sex for a cheeseburger is brilliantly observed while also soul-baring, while stories about reacting to an affectionate boyfriend or her attempts at sexting are by far the funniest bits of the show.

Murphy is on the path to an impressive career, and she’s already amassed her fans—Bobcat Goldthwait casts her in most of his movies, and he executive produced this special. And while there’s never a “correct” path for a comedian, it’s hard not to feel that she may have been better served doing a half-hour special for Comedy Central instead of skipping straight to her first hour.

Though it’s never mentioned in the show, an Irish goodbye is the act of leaving a party without saying goodbye, and that feels thematically appropriate for this special. Murphy is fun to watch, but at the end, you might feel like she left without letting us get to know her too well.

Saturday, February 1 I Walking the Room – Los Angeles, California  It’s our normal live podcuddle… except this one is SUPER! (stupid) Featuring Moshe Kasher.

Saturday, February 1 I RISK! – Seattle, Washington  RISK!, a live show and podcast hosted by Kevin Allison (The State, Reno 911!, Flight of the Conchords, etc.), is the show where people tell true stories they never thought they’d dare to share. The RISK! podcast recently surpassed its 10 millionth download and has a robust and ever-growing fanbase around the globe. People like Sarah Silverman, Margaret Cho, Marc Maron, Michael Ian Black, Adam McKay, Lisa Lampanelli and more, as well as regular folks from around the world, have told their true life stories on RISK!. Slate.com calls RISK! “jaw-dropping, hilarious and just plain touching.” If you love This American Life or The Moth, and you can handle astounding, uncensored, raw honesty, RISK! is the show for you.

Thursday, February 13 I T.J. Miller – Columbus, Ohio  T.J. Miller is quickly becoming one of the most sought after young comedians and actors in the comedy world. He has been named one of Variety‘s “Top 10 Comics to Watch,” as well as one of Entertainment Weekly‘s “Next Big Things in Comedy.” Miller was most recently seen hosting the first season of Comedy Central’s MASH UP, a unique new half-hour series  an exciting mix of stand-up and sketch comedy. T.J. also co-stared in the Fox comedy series THE GOODWIN GAMES opposite Becki Newton and Scott Foley. In addition to his work on TV, he has a popular podcast on nerdist.com Cashing in with T.J. Miller which turns the traditional interview comedy podcast on its head