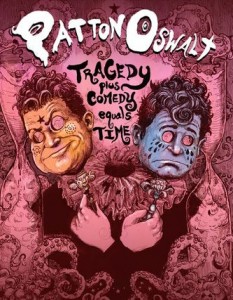 Here are a couple things you’ll learn about Patton Oswalt on his new EPIX special, Tragedy Plus Comedy Equals Time: he once paid for a hooker (the results were rather disheartening), he occasionally gets suicidal during morning supermarket runs (but only under the perfect conditions), and his primary fitness goal is to not be in a Rascal scooter at his daughter’s high school graduation (along with not looking like he’s always wearing a bulletproof vest).

Filmed at the Spreckels Theatre in San Diego, Tragedy is a solid hour that places Oswalt in a more reflective mood than usual. Sure, his previous specials and albums have featured plenty of material derived from his own life (anxieties, neuroses and all), and sure, Oswalt never really abandons his often silly demeanor, but Tragedy finds Oswalt stepping back from the present moment a bit more than he has in the past.

Now in his forties, Oswalt doesn’t bash shitty music like he did in his twenties; he simply doesn’t listen to it. Back then, Nickelback and Creed were sellouts who made music, in Oswalt’s view, purely for sex and money. Oswalt now contends that, compared to what some people in this world will do for sex and money, the bands weren’t really doing anything that terrible.

Oswalt’s perspective also seems to have shifted due to the raising of his young daughter, a “nugget of endorphins” that brightens his life and helps stave off depression. He still occasionally gets down, but his illness has gotten “creative” and learned to pick its spots (see supermarket run).

As Oswalt transitions into a father, he finds the process utterly unpredictable, confusing and confounding. A great example comes when Oswalt turns the television on for his daughter. Unbeknownst to Oswalt, the last channel selected is playing the Benicio del Toro version of The Wolfman, and the first image that gets beamed into his daughter’s innocent brain is an extreme close-up of a bloodied, fully-Wolfmanned del Toro. Oswalt later tries to correct his error by playing Schoolhouse Rock! for her. That night, she races into his room crying about what she saw in Schoolhouse Rock! before breaking into maniacal laughter over the Wolfman image: “The doggy was wearing a shirt,” Oswalt relays to us before shooting a what-the-fuck-am-I-supposed-to-do look.

Beneath the surface of the life-altering experience of raising his daughter, Oswalt hints at the joy he takes in entering a new phase. Watching her race around the park on her scooter seems to surpass the high induced from a killer set. It’s why Oswalt wants to get in better shape. It’s why he took an awful gig that paid him an unconscionable sum of money. And it’s why he aims to raise his daughter properly. Tragedy isn’t Oswalt’s best hour­­—it’s likely nothing will eclipse Werewolves and Lollipops—but it’s perhaps his most audacious. And without question, it’s his most rewarding.

For more great comedians who embrace the trials of fatherhood, check out:

Sunday, January 19 I Sean Rouse – Portland, Oregon  We’re starting the year out with a hell of a dark, filthy and hilarious punch. The first SMUT headliner of 2014 has been featured on the traveling comedy documentary The Unbookables, HBO’s Down & Dirty with Jim Norton and Comedy Central’s Insomniac Tour with Dave Attell. On January 19th, SMUT brings you SEAN ROUSE!

Friday, January 31 I Rich Vos– Hamburg, New Jersey  Rich Vos is an incredibly gifted comic who not only has sharp, insightful material, but he is also a master at working the crowd. His ability to perform in front of any audience has landed him television shows as varied as being the first white comic on Def Jam to performing on The View. Rich was the breakout star of NBC’s Last Comic Standing seasons 1 and 3, was a regular guest on Tough Crowd with Colin Quinn and wrote for Chris Rock when he hosted The Academy Awards in 2005. He also played Lenny Bruce on NBC’s American Dreams and is a regular on the Opie and Anthony radioshow.

Friday, February 7-Saturday, February 8 I Rex Navarette – Tacoma, Washington  Rex is one of the most popular Filipino comedians in the last 10 years.  He has also had the distinction of becoming the most celebrated stand-up comic to perform to multiple sold-out shows in Manila, Hong Kong and Singapore since 2002. He regularly returns to Manila, which has become fertile ground for his style of stand-up, inspiring the growth of an emerging local stand-up comedy scene. His other current projects include his own television series, Rex In The City, for MTV Philippines, which shares his stand-up talents to a younger, hipper TV viewing audience throughout the Philippines. For the upcoming animated series in 2006, The Nutshack, Navarrete voices many of the series’ key characters in this groundbreaking Filipino-American animated production. Navarrete remains to be a one of the hardest working, relatively unknown American comedians today though he’s performed alongside notable national headliners as George Lopez, DL Hughley, Paul Mooney, among others.