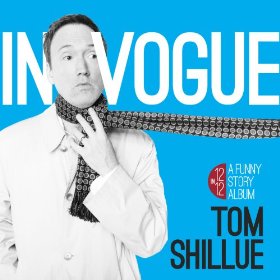 Throughout The Spit Take’s coverage of Tom Shillue’s 12 in 12 project, we’ve used the word “experiment” a few times to describe the venture. That word choice is no accident; Shillue’s endeavor to release 12 albums in 12 months is utterly experimental, as even for someone with the utmost confidence in his or her comic ability, it’d be fairly difficult to guarantee success at the outset of such a project. Yet despite perceived high and low marks in the series, Shillue’s experiment must be deemed a success. We are at the three-quarters mark, and with each album that passes it becomes clearer and clearer that Shillue’s melding of sustained quality and prolificness is, frankly, unheard of.

In Vogue, the ninth entry in Shillue’s collection, is just like its predecessors: a couple loosely-connected stories woven together over a couple tracks, totalling between 30 and 40 minutes. What must be noted about Shillue’s experiment, and In Vogue specifically, is that these productions are not as polished as typical comedy albums. At times the editing is spotty, and one gets the sense that if Shillue were to tell the same stories on a different night to a different crowd, entirely new details would emerge as others would fall by the wayside.

But this merely showcases the brilliance of Shillue’s work. What the performances lack in polish they more than make up for in intimacy. Even if one listens to Shillue’s tales through a computer or a phone, it neverthetheless feels like he or she is in the audience, watching the storytelling virtuoso live onstage. There’s an immediacy to Shillue’s project that is striking for a comedy album. Perhaps it’s the fact that each is being recorded and produced merely weeks ahead of their release, and as time passes and this project becomes less in-the-moment, that dynamic will gradually erode. There’s a grain of truth in this, but odds are it’s not the whole story. The transcendent dynamic Shillue creates is instead a testament to his ability, not to his timeliness.

One of Shillue’s greatest gifts is his knack for allowing his audience to feel as if they know the characters in his stories, as well as to visualize the actions contained therein by including the briefest mentions of small details. Shillue is able to selectively plant minor yet revealing cues that elevate the story simultaneously in depth as well as hilarity. For example, on both of In Vogue’s tracks, “Soup Can” and “Shoe Shine,” Shillue mentions his childhood friend Grover. Several times he alludes to or even explicitly calls out Grover’s thick Boston accent, and by modulating his tone, Shillue is able to impart unto the audience his opinions of and feelings toward Grover (and other characters), adding a novel layer to each tale.

The resulting product, like Shillue’s eight predecessors (to varying degrees), is a master lesson in comic storytelling that’s as bold in its premise as it is unique in its content.

Sunday, August 11 I Quote Unquote – Los Angeles, California  Winner of Best Writing for a Live Show at the Los Angeles Comedy Festival, Quote Unquote is excited to return to the Lyric Hyperion Theatre. Performing regularly up and down the West coast, Quote Unquote features a variety of performers, from actors to writers, to TV personalities, to impressionists. They take their cue from a well-known quote, fashioning a true story inspired by those famous words.

Friday, August 16 I Too Hip Comedy Presents Geoff Tate – St. Louis, Missouri  Geoff Tate will remind you of one of your friends. Maybe a cousin. Maybe yourself. His laid back, conversational storytelling has earned him praise and fans through out the comedy community. One guy, in Seattle, even referred to him as a bar room hero. That’s what he is: a guy telling stories like you’re hanging out with him in a bar. Whether it’s something you’ve done, something you wish you’d done or something you’re glad you never did, Geoff never hesitates to tell the truth about it, however unflattering it might be. The son of a Pentecostal minister and a drug abuser for most of his early 20’s, Geoff is the rare comedian who talks about religion without condescension and drugs without glorification.

Sunday, August 18 I Shut UP! An all Female Storytelling Show – New York, New York  True stories with feelings. So many feelings. Shut UP is an all female storytelling show with seasoned and new storytellers. Hosted by Caitlin Brodnick and Lisa Kleinman. Caitlin Brodnick is a Moth StorySLAM winner, featured in the MOTH podcast and quoted in the AV Club. Other credits include Sideshow Goshko, The Story Collider and Story League (Washington DC). She is a founding member of the MIMSY storytelling team. Her first experience in show business was at age three in a Magnum P.I. commercial, and it forever changed her life. Contact Caitlin Brodnick if you’d like to develop your story to perform in the show.