Tuesday Tease: A Wink and a Smile 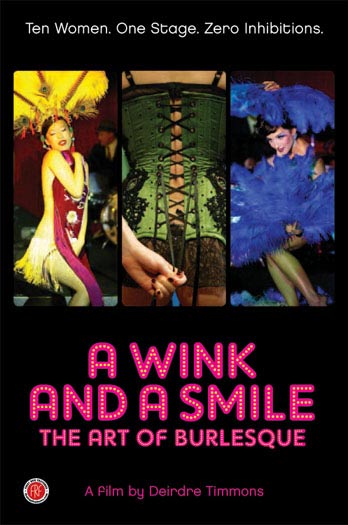 In 2008, filmmaker Deidre Timmons, followed ten ordinary women as they learned the art of burlesque at Seattle’s Academy of Burlesque under the tutelage of Miss Indigo Blue, who most recently won the esteemed title of Queen of Burlesque at this year’s Burlesque Hall of Fame. This resulted in the documentary film “A Wink and a Smile,” which follows a home-maker, a reporter, a doctor, an opera singer, a taxidermist and a student as they transform themselves into burlesque divas over the course of six weeks. Their story is complemented by performances from Seattle’s finest burlesque divas strutting their stuff on Seattle stages.

While this incredible documentary sheds light on the unique burlesque scene that exists in Seattle, it also illustrates the powerful role burlesque plays in helping these women better understand their bodies, their sexuality and their social identity. This film is not only an expose of the burlesque revival, it shows how the neo-burlesque movement has taken the art form and transformed it into a powerful, creative and sometimes hilarious expression of gender and sexuality. END_OF_DOCUMENT_TOKEN_TO_BE_REPLACED

Tags: A Wink and a Smile, Academy of Burlesque, burlesque, Burlesque Hall of Fame.