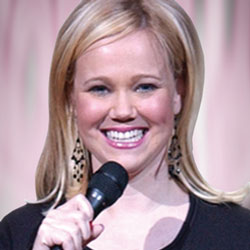 Plenty of seats remaining in her 120-capacity venue, Caroline Rhea was nevertheless in good spirits at her eponymous Edinburgh Festival Fringe show, or at least in good enough spirits to joke about how thing weren’t exactly going her way. “I had this song written for me for the Fringe,” she noted of her intro music, Neil Diamond’s “Sweet Caroline,” leading the audience in a synchronized arm-wave and chorus sing-a-long. She also recalled how, having spent summers in Scotland while growing up, her family always enjoyed After Eight Thin Mints following dinner. Out came the cookies, around they were passed, and in Rhea dove to an informal, personable, self-deprecating hour of material surprisingly and deliciously registering on the PG-13 side of the spectrum.