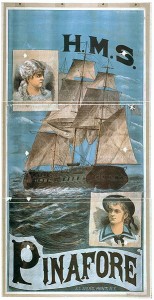 American composers like George and Ira Gershwin, Irivng Berlin and Rodgers and Hart would eventually take away Britain’s dominance in the musical theater world by replacing the operatic and theatrical styles of the 19th century with a modern approach more fitting to 20th century sensibilities. They began to incorporate popular musical styles like ragtime and jazz and, by the 1920s, the focus began to shift away from the plot and more towards star actors or actresses, big musical numbers and popular songs. Many of today’s “standards” were written during this time period and the careers of early Broadway legends like Fred Astaire were launched. END_OF_DOCUMENT_TOKEN_TO_BE_REPLACED

Ever seen a canine comedian? How about an acrobatic house cat? Well, if you live in Oceanside, California, you are in luck because Popovich Comedy Pet Theater is coming to town next week on Monday, September 26 and Tuesday, September 27 to the Star Theatre. This show is part of a tour that’s going to hit California, Oregon, Washington, Idaho and Utah. So even if you’re not in the Oceanside area, you can see them in Eureka on Wednesday, October 19 and Thursday, October 20 at the Eureka Theater and in Hoquiam, Washington on Thursday, November 3 at the 7th Street Theater. Tickets for these shows can be found here and information on all the other shows on the tour can be found here. END_OF_DOCUMENT_TOKEN_TO_BE_REPLACED