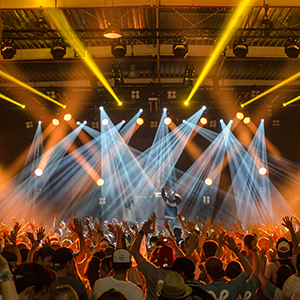 Have you spent winter dreaming up a summer festival – but you’re not quite sure where to begin? We’ve got you covered. Festival event planning may not be the easiest item on your springtime to-do list, but with a few basics, you’ll be on the road to success in no time.

When planning any event, start with the audience—who will be in the crowd? Consider their age range and other demographics. Creating an audience persona or having a general idea will help you decide how to market, where to host the event, and countless other details. For example, you wouldn’t want to have a family festival at a nightclub, but if you were having a three-day music festival, a nightclub may fit your needs. Keep your target audience in mind throughout the planning process.

Budgeting isn’t the fun, creative part of festival event planning, but it is imperative, especially for larger events. Decide how much you can spend on performers, vendors and venues before going into negotiations so you don’t sink into debt.

Consider how much you will want to charge for your festival and how much your attendees – going back to your target audience – would want to pay. You may want to consider early bird or group pricing to help encourage early purchases and help out attendees who cannot afford the general ticket price.

Location is one of the most important aspects of festival planning. Will your festival take place in an urban warehouse or in a farm field under the stars? Be realistic. Look for a space that’s easy for the masses to find and get to. Check out the parking and/or public transportation situation. Consider the location of bathrooms, the festival entrance and exits.

In the initial stages of festival planning, whether it’s food, music, art, or all of the above, determine your goal and start reaching out to groups or individuals you’d like to feature. While you can keep some mystery about the main event, you will want to confirm it before too much time goes by, as most people will wait to hear what it is before buying in.

A frequently overlooked key to festivals is a dependable security team. Many companies exist exactly for this reason – to make your attendees feel safe and protected. Brief your security staff on how you want them to act in various scenarios and where you want them to be.

When interviewing a security team for your event, you’ll want to not only look for a team that can protect and enforce regulations, but also serve a certain amount of hospitality to your guests. You want your security staff to be approachable, not oppressive.

Other qualities you will want to look for in a festival security team:

If you are hosting a food and beverage festival – you likely already have the food all planned out. However, if you’re hosting an event that isn’t cuisine-centric, you’ll want to make sure that you have options in place for your all-day attendees. If you are serving food you will want to make sure you have the appropriate permits in place before your festival begins.

A booming trend across the country is food trucks – and festival event planners are taking advantage of their popularity. This food solution is also often more affordable for you and your attendees, and can provide a more eclectic food selection than a traditional catering service. As food trucks contain everything they need within the truck, you will likely only need to provide a place to park and trash services, which makes for an easy setup when dealing with remote or outdoor events.

Promoting a festival is a long-haul marathon – from announcing on social media to creating a brand on Instagram and doing direct media outreach. Create a calendar, plan ahead and set deadlines for each promotional marker.

Sharing is caring. Comment below with your best festival and event planning tips. How did you do it?

How Round Table Tours Became a Top Tour in Montreal 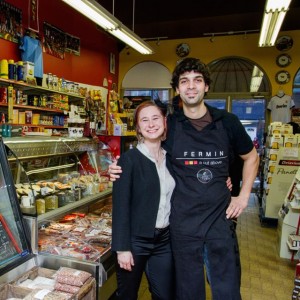 You already know poutine, the cheese-curd and gravy comfort food. No? Someone needs to take a trip to Montreal. But poutine is only the beginning. Stacked smoked meat sandwiches. Arguably, better bagels than New York (easy, New Yorkers, we said arguably). Ice wine. Soft cheeses from provincial farms. Craft brew a plenty.

Who’s Ready for a Food Tour?

Founded only a few years ago, ‘Round Table Tours (Tours de la Table) is already Montreal’s number two activity on Trip Advisor. It is popular not only with tourists, but hard-to-impress foodies who live in the city.

Maybe it’s because tour owner and operator Mélissa Simard is bright and personable. Or maybe because she takes visitors to “forbidden” places – behind the kitchen, into neighborhoods well off the tourist track and to food production sites. Or maybe it’s her long list of accomplishments: A degree in Canadian Studies from McGill University and a diploma in professional cooking from St-PIUX. Winning “Best Female Entrepreneurial Project of Montreal” in 2013. A history working in top restaurants.

‘Round Table Tours is definitely doing something right. Whether you’re thinking of organizing your own tour group or looking for a good food tour, take a cue from Simard.

The Lightbulb Goes Off

Simard got the idea for the tours after cycling from Seattle to California, popping into eateries along the way. She felt burned out from years of working in restaurants and the trip provided a much-needed break. “I thought, this is so nice, people should do it all the time,” she says.

An idea was born: exceptional food tours with a rare look behind the scenes. Get guests in the kitchen and talking to chefs. Go to breweries and tea shops, to chorizo producers and rooftops to explore urban farms. It’s the unexpected, the underground, the “how it’s made” stuff that resonates with people. 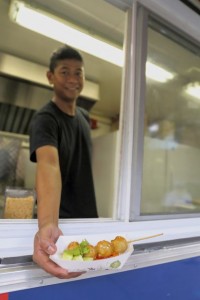 Many food tours offer an overview of the region, small bites with a heavy dose of history and attractions. ‘Round Table Tours does it different. Simard wants her groups to “come in with an open mind, see things they’ll never see.”

According to Simard, the tours focus on important, iconic food that shaped the city. A taste of the Iberian Peninsula by way of Spanish tapas, Portuguese petiscos and Basque pintxos. A sampling of Montreal Jewish food from family-owned diners, delis and bagel factory. An eat and ride that explores Montreal’s emerging food truck scene. For the hungry but health conscious, there’s the Living Table Tour, which zeros in on the city’s green scene.

Tour-goers can expect the equivalent of a seven-course meal. “No one leaves hungry,” Simard says. Or thirsty, we suspect as most tours include wine, tea or coffee.

In-depth knowledge of the culinary scene and long-standing connections to the restaurant world helped Simard create her vision. But as the saying goes, anything worthwhile comes with challenges. Like many tour operators, Simard has extensive knowledge about her passion – food, but no prior business experience. “I don’t have a business background. It’s been trial and error,” she says. And she’s busy, running at least three or four tours a week, six in the summer.

As for expansion? Simard would like to set up ‘Round Table Tours in other cities, perhaps in British Columbia or maybe in one of those hamlets dotting the Quebec countryside. But there are no immediate plans. “We’re still growing in Montreal,” she says. If you’re headed to La Belle Province (lucky), find the tour for you.