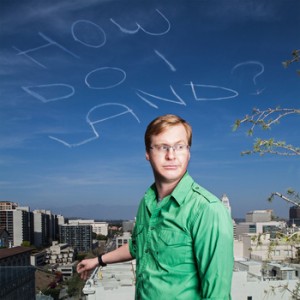 The title of Kurt Braunohler’s debut album, How Do I Land?, comes from the hilarious and absurd stunt he pulled off this past March, for which he launched a Kickstarter campaign to raise $4,000 so he could enlist a pilot to skywrite “HOW DO I LAND?” across the Los Angeles sky. As Braunohler explains on the album, he believes inserting stupidity and absurdity into daily life for their own sake can make the world a better place, if only for a short time. Going so far as to say this premise is his “purpose as a comedian,” it’s quite clear that these are not hollow words, but rather something of a guiding vision for Braunohler’s onstage persona.