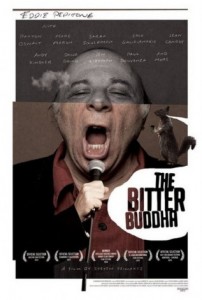 There’s an implication throughout “The Bitter Buddha” that comedian Eddie Pepitone, the subject of this documentary, is, well, bitter. Bitter that after a stand-up career that spans decades, he hasn’t achieved mainstream appeal or sold a TV show Seinfeld-style. That even though he’s beloved by modern comedy deities like Patton Oswalt and Sarah Silverman, it’s somehow not enough. Director Steven Feinartz begins his film with the assumption that in the five stages of grief – lamenting the loss of theoretical lucrativeness – Pepitone is stuck on “anger.”

Yet despite this narrative thread, “The Bitter Buddha” paints Pepitone as having completed these five stages. Lack of popularity is no longer an albatross around his neck. In fact, Pepitone has the uncanny ability to see the albatross around everyone’s neck, and talk them into taking it off. Pepitone is on “acceptance,” and laughing about it. END_OF_DOCUMENT_TOKEN_TO_BE_REPLACED

Fans of urbane podcaster and “Mr. Show” veteran Paul F. Tompkins have likely watched his recent Comedy Central special, “Laboring Under Delusions,” which shares much of its material with this audio-only version.

But “Live in Brooklyn

” [ASpecialThing Records] also contains 19 more minutes than even the “uncensored” Comedy Central DVD, and since Tompkins is both a gifted storyteller and jaunty improviser, “Live in Brooklyn” is worth the price of admission—at least if you’re dying to hear such elaborately-titled “riff suites” as “Vaudeville Moths – The Great Chandelier Debate – The Organs of the House Skeleton,” which opens the album.

Recorded at Brooklyn’s Bell House, it’s looser than the TV special, which took its name from Tompkins’s stories about odd jobs and general professional embarrassment. Those stories remain in roughly the same order, but their delayed intro blunts the thematic unity when compared to the special. Tompkins’s improv is charming and witty, as usual, but the edited-down version was more presentable to general audiences for a reason.