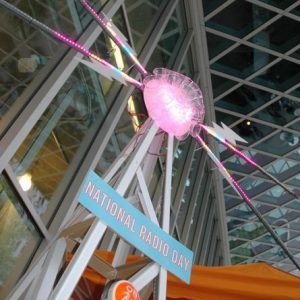 Last August I helped my Doer colleague, Sabrina Roach with her National Radio Day event in Seattle by facilitating the build of an 8′ light-up “Radio Tower.” The prototype was made almost entirely from reclaimed materials and some borrowed electronics. It turned out so awesome that the prototype became the finished product, and in the process, the idea for the Art+Tech+Trash Meetup Group was born.

Second Use has graciously hosted our meetups on the last Saturday of the month since January. At our first meeting, we discussed what we might like to achieve as a group. By March we’d settled on an interactive board game made from reusable materials, and “Space Oddity: The Art+Tech+Trash Escape Game” started to take shape.

You can find us on September 17 and 18 at Seattle Mini Maker Faire, under the Big Top at EMP. We’ll have a 20′ booth with plenty of room for the game and our “ReMake It Station” where you can create obstacles for the game, or your own treasures to take home.