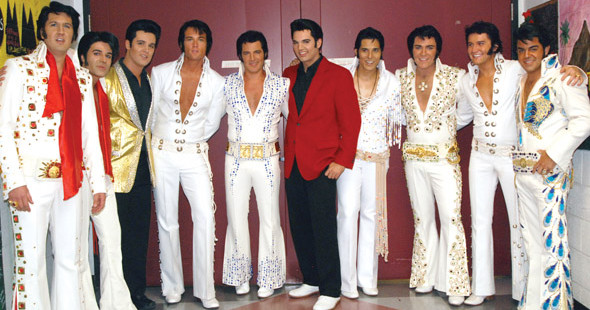 As many musicians out there know, a large portion of learning to be a instrumentalist or songwriter is learning to properly steal from your influences. Many musicians struggle to be original but chances are, someone has played the combination of chords and notes that you “wrote” before. That said, if you really get down to it, the actual notes and chords don’t really matter. It’s what you bring to those chords that matters; your unique perspective and individual playing style. No matter what you do to differentiate your sound from sounds of the past, there’s bound to be a little of your influences in there somewhere. That’s okay, as long as you also bring a little of yourself into the mix as well.

With that said, there are two very different ways to approach a tribute show. Some artists attempt to re-create the exact sound of the artist they’re paying tribute to, others choose to re-interpret an artists songs in their own unique way. I find the latter to be more enjoyable because it really distills music down to its pure form and pays homage to the folk tradition, where songs were passed down over the years; constantly changing and being re-interpreted. By interpreting a song in their own voice, a musician ensures that those songs will continue to grow and change for years to come. Songs by revered songwriters like Bob Dylan or Leonard Cohen are constantly being changed and re-interpreted by musicians, while artists like Elvis or Neil Diamond often get impersonated, with musicians donning their cadence, look and stage presence.

Today on the Mid-Week Beat, we feature both kinds of tributes: impersonations and interpretations. If you’re a fan of the original artists, chances are you’re going to enjoy hearing the songs you love regardless of whether they’re done straight or in an entirely different style. What matters are the songs.

“Join American Standard Time’s & KEXP’s Greg Vandy for a special annual evening at Columbia City Theatre to showcase the vision of Harry Smith’s Anthology of American Folk Music with some of the finest performers in the Northwest and special guest old-timey visionary Frank Fairfield.

An occultist, a folklorist, a psychedelic artist, a filmmaker, a collector; Harry Smith was all of these things, and all of these things played a part in forming his magnum opus: the six LP collection The Anthology of American Folk Music. Built from his personal collection of 78rpm records and arranged in an arcane vision of modern sociology, the Anthology introduced America to folk, roots, and blues luminaries like Clarence Ashley, The Carter Family, Dock Boggs, Mississippi John Hurt, Blind Willie Johnson, Charlie Poole, and many more. The Anthology sparked the 1960s folk revival, as the haunted sounds of a lost America poured out of the stereos of college students and young activists.

Far from a simple grabbag of old sounds, The Anthology of American Folk Music synthesized the many streams of American tradition into a swift river of lost knowledge, a torrent that dragged along so many intellectual and artistic leaders in the 60s and beyond. It’s impossible to understand American folk music without understanding the power of Harry Smith’s Anthology.”

The Wheel Company is really excited to bring you a fourth Bob Dylan Tribute show at The Kuumbwa in Santa Cruz this Friday with some very talented musicians playing some classic tunes from one of our generations most influential writers and poets.

From the many years of admiration of Elvis, Danny Vernon has created a show that holds the excitement of the King on stage throughout various stages in his career. With the voice, look, and passion of the twentieth century icon, join Danny Vernon, Marcia Ann Margret and the DeVilles as they portray the King of Rock-n-Roll like no other! They will have you dancing in your seat all night long!

The Wheel Company is really excited to bring you another night of tribute this Saturday: a Neil Young Tribute Show. Once again this show will feature some very talented musicians playing some classic tunes from one of our generations most influential writers and poets.

Enjoy an evening of old school r&b and funk music with international singer, Carmen Jones (and the DejaVu Band), plus special guests, Poet Joy Elan and singer, Brian Leads. The talented San Francisco Bay Area-based band features the Bay Area’s best musicians and singers who will be performing the soulful music of the late legendary soul singer, Teena Marie, along with a fiery Carmen Jones original and some “funkadelic” versions of holiday favorites.