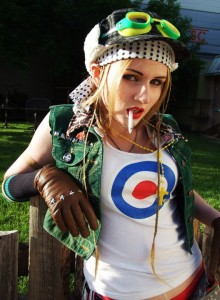 Pop culture is always an odd and fascinating thing to behold. Completely unpredictable fads and fashions slip in and out of the public’s consciousness like a pinball, bouncing rapidly from thing to thing in a tempest of lights and sound until it finally drops between the flippers. But neither the ball nor the fad is truly gone forever. They are just sitting in their hold, waiting for their turn to be shot back out onto the playfield.

The 1990s were an… um…. interesting time for pop culture politics and music. This was a time in history when Pepsi was clear, Beanie Babies were an investment and Tank Girls roamed the earth. And now it looks as if it’s the ’90s turn in the ball shooter of retro-Americana with this weeks featured burlesque events.

Saturday, March 1 | LFM presents: 90s Throwback at the White Horse From Fiona Apple to Tag Team, Aerosmith to Enigma and every where in-between, we’re heading back to the last decade of the 20th century to revisit freedom, youth, the fall of the Berlin Wall, and plenty of Bill Clinton denials. Don’t forget the Humpty Dance and wondering if we’ll make it through Y2K. The ladies of Les Femmes Mystique will tantalize you with dances to their favorite 90s sexy songs, with comedic acts inspired by fun – and often hilarious – 90s hits. Get ready for a musical rendition of Wayne’s World, acoustic versions of 90s alternative music, stand-up comedy, and circus arts.

Saturday, March 1 | Black Widow Burlesque presents Snatch, Crackle, POP! While it is not specifically a ’90s show, the decade will make an appearance this evening.  Snatch, Crackle, POP will be a “risque romp through the glittering world of pop culture! From your favorite childhood cereal commercials to the pop idols of today, you won’t want to miss the troupe that keeps burlesque weird in this one time only tours de force of POP! Featuring Ginger Snaps, Zaftigg Von BonBon, Betty Blue, Sailor Cherry, Harlet Davidson, and Andylicious! Hosted by Mike Graupmann and Ralphie Hardesty!