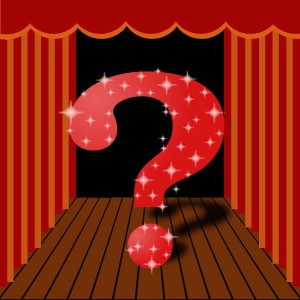 When you go to a burlesque show, you never quite know what you are going to get. There are a few guarantees (rhinestones, pasties, music and horrific puns) but beyond that the night is a glitteringly bedazzled mystery for the audience to experience.

For the three shows that we’re featuring this week, it will be a mystery for the performers as well! Burlesque is usually a meticulously choreographed and rehearsed activity, but these brave performers have thrown caution to the wind and will come to the stage armed with nothing but guts and talent to bring you improvised acts to excite and amaze. Think of it as a slightly sexier, live version of the TV show Who’s Line is it Anyway?

Ever hear a song and think to yourself I would really love to see a burlesque routine done to this? Here’s your chance! Focus Fox Burlesque is putting the teasing in your hands. The foxes are coming to the stage with absolutely no preparation. You, the audience, have the opportunity to pick the music and the dancers will have no clue until they walk onstage!

Sunday, February 2 | Whose Thong Is It Anyway?

Whose Thong Is It Anyway? is Seattle’s improvisational burlesque show where everyone takes their clothes off and the points don’t matter.

Akin to the television program Whose Line Is It Anyway?, this show will involve a small group of performers sharing a stage and being presented with improvisational scenarios which will be scored by their talented MC. This show features the talents of Cirquesse, Scandal from Bohemia, Paige Rustles and EmpeROAR Fabulous.

But that’s not all! If you purchase VIP tickets for the show, you will also get a seat in the first two rows, a chance to participate in the show, photos with the cast after the show and an 8X10 souvenir photo signed by Cirquesse herself!

On the second night of VivaVoom’s Vegas AND Bust Weekender, their performers will present improvisational solo and ensemble dances for your entertainment to music that YOU CHOOSE by lottery! There will be Boobie Prizes!

VIP tickets include a goodie bag AND reserved seating!!