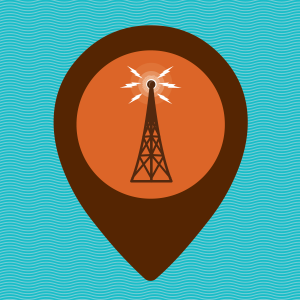 Community radio is something to celebrate. It brings people together, allows freedom of expression, spreads joy, music and so much more. Celebrate it today, World Radio Day, an UNESCO holiday and global series of events honoring democracy, community, education and cultural ties.

Brown Paper Tickets is doing it up big with a reception and party at Seattle Public Library (Central Branch, 10th floor) from 5-7 pm. Not only are we celebrating World Radio Day, we’re applauding the approval of 13 new radio stations in the Puget Sound, including 5 to serve the lovely city of Seattle and 2 stations awaiting approval.

Join us. Enjoy a piece of radio-tower cake. Listen to inspiring, insightful “lightning” talks from new low-power fm radio stations. Get the details on the broadcast range of the stations.

Click on the map below to see all 15 new community radio stations. 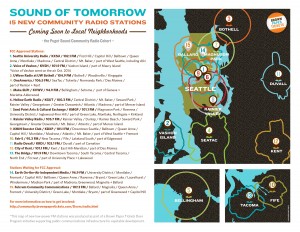 Roach works on equitable community development through locally-owned communications infrastructure, such as advocacy for an open Internet, municipal broadband and the build-out of low-power FM.

Seattle’s official celebration for UNESCO’s World Radio Day is produced by Brown Paper Tickets as part of our philanthropy-in-action strategy, the Doer Program. We believe in a combination of donations (donating 5% of profits from every sale) and “doing” (the Doer Program) to maximize positive change for communities.

As a Doer, Sabrina Roach chose to support equitable community development by building nonprofit media and communications infrastructure, including community radio and municipal broadband. She led a National Make Radio challenge and she is also the director of “Upgrade Seattle: A Campaign for Equitable Public Internet.” She is also working with a grassroots community advisory group.

“Like our public libraries and community centers, community radio offers hands-on access and connection, education and entertainment that feeds and strengthens our neighborhoods,” said Roach. “It adds another dimension to public services; it acts like ‘community glue,’ building bridges among unlikely groups of people representing different interests and demographics.”