Tuesday Tease: Mardi Gras with a Side of Southern Fried Burlesque 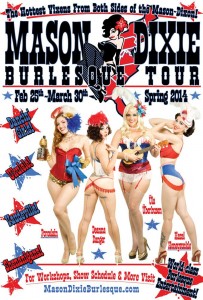 Is it that time again? Can you believe that Fat Tuesday is just a week away? Things have been raging in New Orleans since the 15th but in the rest of the country, this is the week for Mardi Gras madness.

This week I thought I’d highlight some Mardi Gras events happening both north and south of the Mason Dixie line. I also wanted to feature some great burlesque events happening in the South itself, the American home of the Mardi Gras. We all know that Southerners know how to party and this week you can be sure they’ll be strutting their stuff.

Also, check out this great interview we did with Deanna Danger last year on the Tuesday Tease too! She offers some great advise for touring burlesque performers.

Friday, February 28 I Whiskey Rockette’s Present: The Good, The Bad, and The Glittery – New Orleans, Louisiana   Bringing you a collaboration of New Orleans’ finest honky tonk burlesque show! Featuring the Whiskey Rockette’s Burlesque Revue with Gal Holiday and the Honky Tonk Revue. This show show is ready to give you a darn, toot’n, good time! With original country/rockabilly themed acts by: Ruby Rage, Charlotte Truese and Cherry Brown. This show is sure to take you back in time to make you remember the good ole days of Hee Haw with a twist!

Sunday, March 2 I Mardis Gras! – Seattle, Washington   The fun and crazy minds that brought you Cirque Du Creep are now throwing a show full of boobs, beads, booze and bands! Come join B

ella Luna and her crew as they celebrate a night of sex, death and southern discomfort because there’s never quite a party like Mardis Gras. Burlesque by: Cirquesse, Inara Echo, Morgue Anne, Vera Vice, Delicka Zee, Machete Confetti Variety Act Experience and your host Bella Luna. And that’s not all! There will be musical performances by Violent Expulsion, Sioux City Pete and the Beggars and Molotov Colostomy.

Tuesday, March 4 I Morbid Curiositease: Mardi Gras Madness with The Peculiar Pretzelmen – Seattle, Washington   Hosted by the Axeman of New Orleans (aka Diva le Déviant) The Peculiar Pretzelmen Big Band will comply with the murderous request to never stop the music…or else someone gets it. Live music peppered with burlesque and variety all night. The Peculiar Pretzelmen have been keeping the Mardi Gras style big band tradition alive in LA for 4 years, but this is the first time it’s happening in Seattle. Performances by: La Petite Mort, Jovie DeVoe, Karmen Sutra, Flirty Sanchez, Sailor St Claire, Violet Tendencies, Persephone Illyri and Christine Anne.